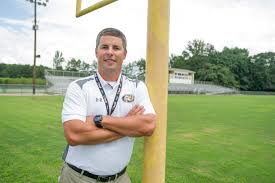 Only two years into his tenure at Beulah, Cody Flournoy’s drastic turnaround of the Bobcats football program is garnering statewide attention.
Following a breakout year that saw Beulah end its 10-year playoff drought and earns its most wins in a season since 1995, Flournoy was chosen as the 3A Coach of the Year by the Alabama Football Coaches Association.
After a 3-7 season in 2017, Beulah opened the 2018 season with 5-straight victories, including a thrilling 27-26 victory over defending region champion Montgomery Academy.
Team leaders including linebackers Caden Dowdell and Justin Hancock anchored a solid defense and diminutive running back Chris Person had a stellar year.
The Bobcats finished second in Class 3A Region behind St. James, who defeated them 49-20 in their lone head-to-head matchup Oct. 12.
Chilly, wet conditions set the stage for a defensive battle between Beulah and first-round playoff opponent Thomasville, who eked out a 7-0 win at Bobcat Stadium Nov. 9.
In two seasons at Beulah, Flournoy has compiled an 11-10 record. For more information or to see a list of other award winners, visit www.alfca.com.