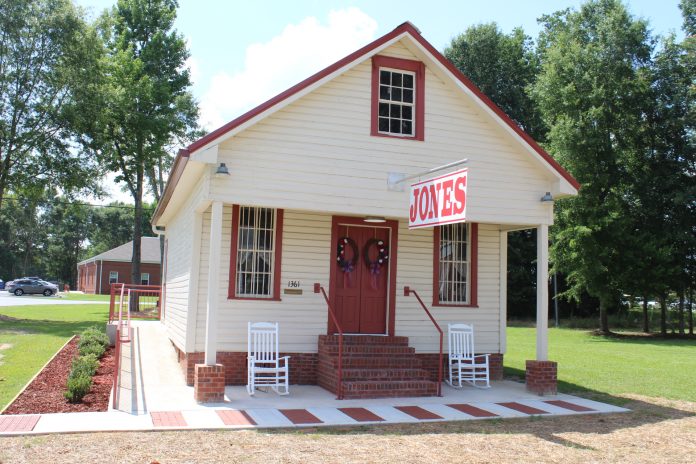 The city of Smiths Station will hold a grand opening of the Historic Jones Store Museum July 13.
Once purposed as a general store, the more than 100-year-old structure was gifted to the city in 2015. During the last four years, city officials have worked tirelessly to give the structure a facelift and create a space that would showcase the city’s deeply rooted history.
“This is a signature addition to our city. While it may not be the largest museum in the world, we believe it perfectly showcases our city’s past and is a way to preserve our history for generations to come,” said Smiths Station Mayor F.L. “Bubba” Copeland.
The museum has a blend of old and new pieces from its past. In the middle of the museum is a large glass display with multiple exhibits that will be rotated on a seasonal basis.
One of the museum’s major exhibits is dedicated to legendary country musician Conway Twitty. Last year, two fliers bearing Twitty’s real name Harold Jenkins and a photo were donated to the museum, confirming his brief residence in the city in the early 1950s.
“This has been one of my dreams since Smiths Station became a city in 2001. The railroad history of this town is something a lot of people either don’t know about or may have forgotten,” said Smiths Station Communications, Planning and Zoning Director Lisa Deason in a 2018 interview with the Observer. “Through this, my eyes have really been opened as to how rich a past Smiths Station has. It’s been exciting to get into that and work on it.”
Admission to the Alabama 200 certified event is free and guided tours will begin promptly at 10 a.m. EST.
For more information, call 334-297-8771, like and follow the city’s Facebook page or visit www.smithsstational.gov. The structure faces Lee Road 298 and is adjacent to the Smiths Station Government Center, which is located at 2336 Lee Road 430.