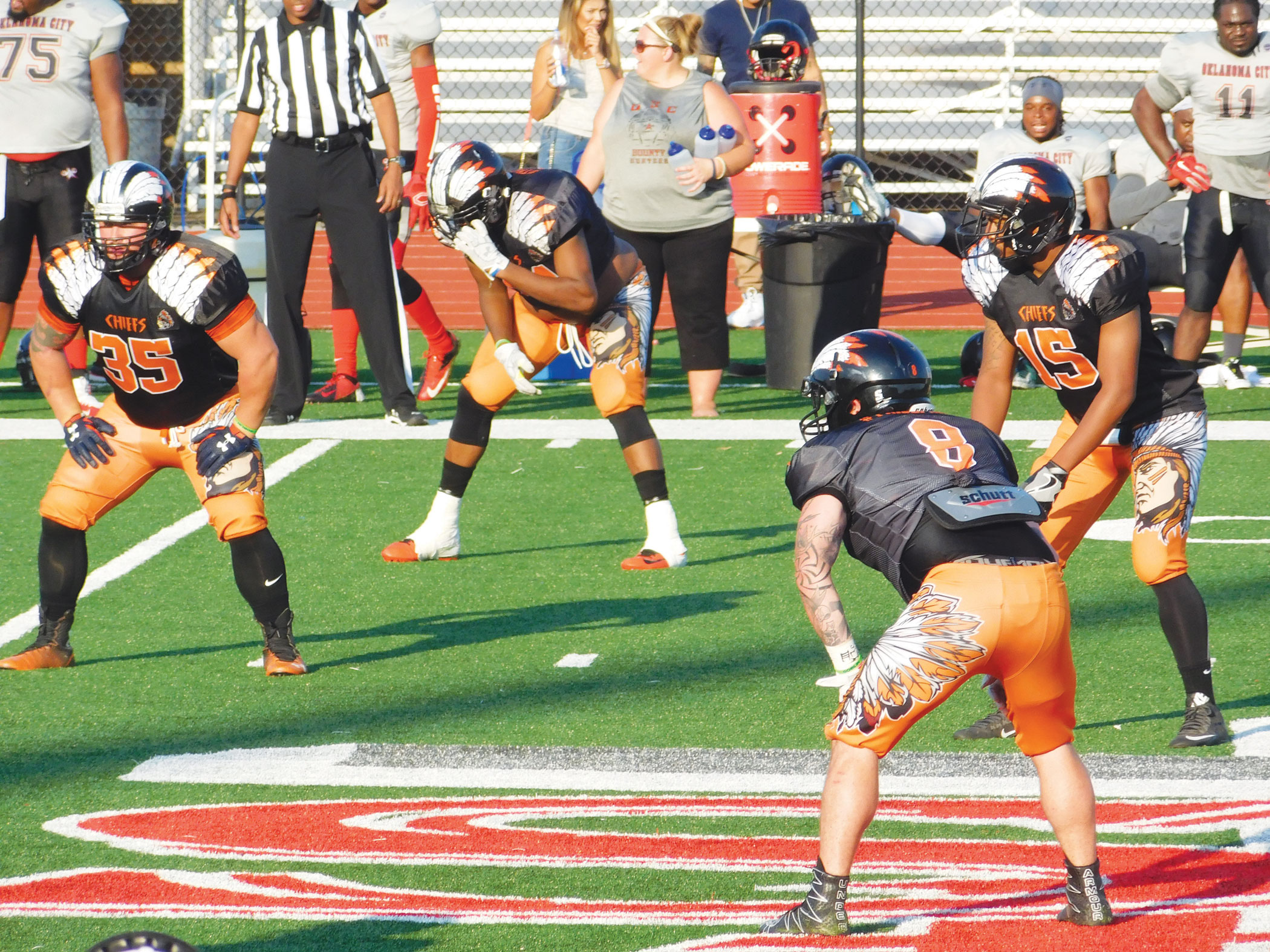 Our Opelika Chiefs came up short, 17 – 14,  in the APDFL National Championship game Saturday night in Locust Grove, Georgia. The Chiefs lost on an Oklahoma City Bounty Hunters’ 25-yard field goal with 2:18 left in the game, ending the Chiefs’ season with 13 wins to go with the final loss. Still a pretty good season, huh?
The Bounty Hunters overcame a 14-7 Chiefs’ halftime lead, aided by a series of highly questionable officiating calls including one where an initial turnover (fumble) call, giving the ball to the Chiefs, was overturned after giving the OKC sideline fully five minutes to plead their case, leading to the Bounty Hunters’ game-tying touchdown.
The Chiefs struck first, with 1:15 left in the first quarter, on an 80-yard pass from Kyle Caldwell to Tracy Brooks. The Bounty Hunters came back early in the second quarter with a sustained drive, scoring to cut the Chiefs’ lead to 8 – 7.
The Chiefs scored again with five minutes left in the half, a one-yard plunge set up by a 25-yard pass for Caldwell to Brooks, to lead 14 – 7 at the half.
The two teams moved up and down the field against each other, not scoring, until the reversed call previously mentioned. OKC then struck quickly on  a 26-yard TD pass to knot the score at 14 – 14.
Then came the fateful field goal with 2:18 left on the clock. The Chiefs were unable to move the ball on their ensuing possession with OKC running off the clock’s final 39 seconds.
All in all it was a good evenly matched game. The Bounty Hunters were clearly the best team Opelika played all season. They were considerably bigger, and maybe a little quicker, on both offensive and defensive lines, but our guys held their own.
After the game Coach Hunter Price had this to say: “We were proud of the effort these guys gave all year. They put it on the line every single play. We played a great football team in OKC and we congratulate them. I want to thank the best coaching and support staff around for coming in and helping lead the Chiefs all season.
“A special thanks to the fans who went to every game and supported what these young men are trying to do. I know it’s tough right now but the sun will come up tomorrow. And we’ll get up in the morning and start recruiting for next season. Go Chiefs!”
Editors note. I really hated to mention the officiating, lest I be accused of sour grapes. It wasn’t. It was the worst officiating I have seen in my (almost) 79 years. I could have mentioned other examples.