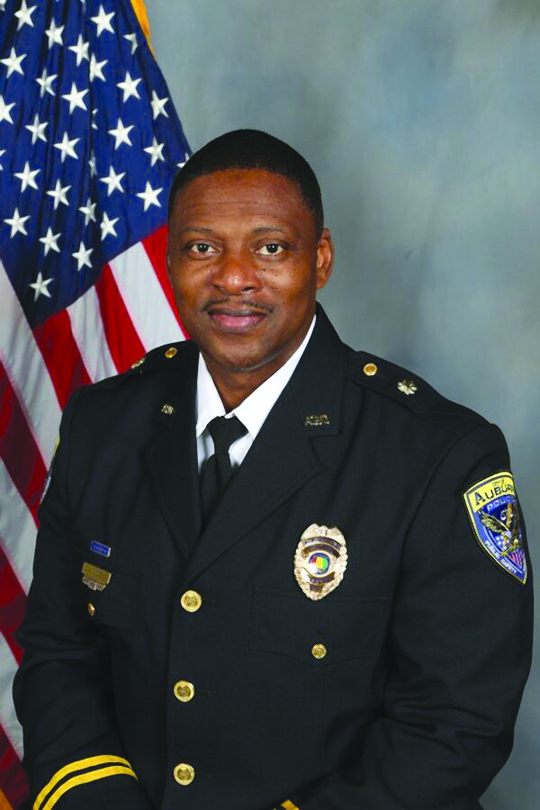 Cedric Anderson will become the next Auburn Police chief effective on March 1. He will take Chief Paul Register’s place as Register moves into his new role as public safety director.
Anderson is a 27-year veteran of the Auburn Police Division and most recently served as the section chief for city operations, which included the patrol and records sections. Prior to his time with the City, Anderson served in the U.S. Army and as a police officer for Auburn University.
A longtime area resident, Anderson is a graduate of Auburn University and holds a master’s degree from Faulkner University. He served as an adjunct instructor and is currently working on his doctorate at Auburn University. Anderson has received numerous awards and recognitions during his distinguished career.
Since beginning his employment as a patrol officer in 1992, Anderson has held nearly every rank within the police division including that of a patrolman, narcotics detective, supervisor in both the patrol and detective sections, patrol lieutenant, patrol captain and has served as assistant chief since 2016. He has also served the division as a polygraph examiner and as an internal affairs investigator.
Anderson is known throughout the community and has been involved and assisted in the development of such community outreach efforts as the “Bridges” program and “Neighborhood walks.” Additionally, he is well known throughout the law enforcement community and brings a wealth of experience to the position.
Current Assistant Chief Will Mathews will also be promoted to deputy director of public safety over communications and emergency management effective on March 1. Mathews is a 27-year veteran of the Auburn Police Division and has served as the section chief of the Auburn University Precinct since 2016. Mathews has been involved in disaster preparedness efforts and risk/threat assessments for public and private community members including Auburn City Schools as well as Auburn University. Additionally, he played a leading role in technological advancements throughout his career by testing, procuring and implementing such improvements as in-car computers as well as radio and camera systems.
“There are no finer employees anywhere than what we have here at the city of Auburn. Will and Cedric are proof of that,” said Auburn City Manager Jim Buston. “Congratulations to both of them, and I look forward to working with them in their new capacities.”
For more information, visit news.auburnalabama.org.