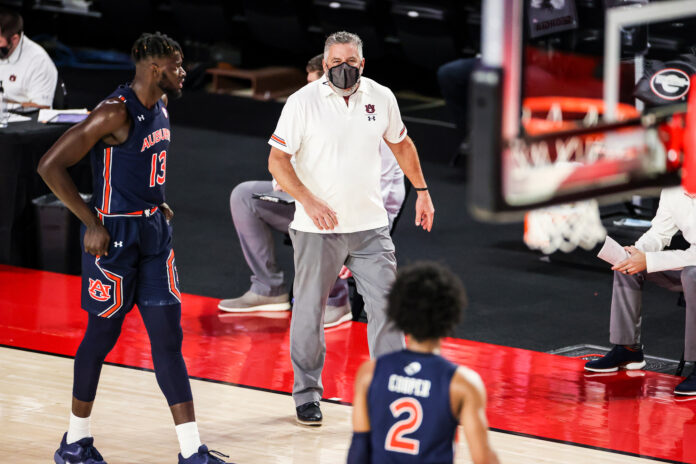 By JD McCarthy
for the Opelika Observer

Prior to Bruce Pearl’s arrival at Auburn, it would be the highlight of the season if Auburn beat Kentucky. Before Pearl arrived in 2015, Auburn was 16-85 all time against Kentucky and from 1990-2015 went 1-33.

In the last 11 games, Auburn leads 6-5 and has won three of the last four. Yes, none of those three wins occurred In Rupp Arena. Yes, this is arguably the worst Kentucky team in quite some time, but they are still loaded with 5-stars and are the standard of the SEC.

“I think you’re judged by how you do against the best teams on your schedule and certainly, Kentucky’s going to be as good as anybody on our schedule,” Pearl said. “We played Kentucky at home, I think, three years in a row. And the reason we’ve got them at home is because TV wants the Auburn-Kentucky game because it is competitive, and our program has been one of the top five programs in the SEC over the last four years or so.”

There was no raucous home crowd when Auburn hosted Kentucky on Saturday, yet the Tigers still managed a 66-59 win.

Kentucky may still be the best program in the SEC, but under Pearl, Auburn is measuring up favorably against them.

The turning point in the rivalry was in 2019 when Pearl, Bryce Brown and Jared Harper stunned the Wildcats in the Elite Eight. Kentucky had won both regular season matchups, and Auburn was without Chuma Okeke, who had recently become the team’s best player.

None of that mattered to Brown and Harper, who combined to score 50 points in the biggest game of their lives.

The game proved Auburn was no longer the David to Kentucky’s Goliath and narrowed the gap between the two programs. Since then, the home team has won all three matchups.

The gap has only gotten smaller as Auburn has landed back-to-back 5-star recruits in Shariffe Cooper and Jabari Smith, players who in years past would be tormenting Auburn fans, not sending them to their feet in celebration.

It is more than just Auburn landing elite recruits, though; Auburn now has a complete team that has depth as well as star power.

Cooper sees the floor in a way few players can, getting the ball to his teammates before they realize they are open; JT Thor is starting to turn his massive potential into production and Allen Flanigan is looking more and more like Isaac Okoro 2.0 with each passing game. Devan Cambridge and Dylan Cardwell have emerged as key rotational pieces coming off the bench.

Cambridge volunteered to be taken out of the starting lineup when Cooper returned and has played his best basketball since then, making nearly 50% of his three-pointers and scoring 10 points or more in each of his three games off the bench, something it took him 11 starts to accomplish. Cardwell was not close to the level of a prospect as most of Kentucky’s players, but went out and more than held his own, grabbing eight rebounds in 22 minutes.

With Pearl’s ability to land top-tier talent and to develop depth around it, Auburn’s recent success against Kentucky is not a flash in the pan but represents a dynamic shift between the two programs.