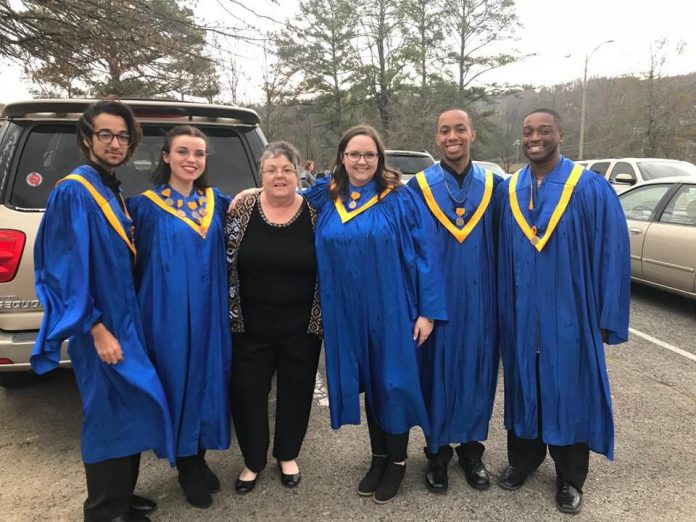 You can hear it coming from the choir room: the sound of heartfelt singing and laughter. For Beauregard High School (BHS) choir students, that music is their passion. But for seven choir members, that passion led to a tough choice: singing at All-State Choir or going to their senior prom.
Choir members spent hours practicing and learning the songs they had to sing to earn a spot at All-State.
Only one out of three singers from across Alabama is chosen to perform at All-State. The BHS students who made the cut had no idea that the performance was the same night as their prom.
“I actually found out the week they were trying out for All-State,” said Choir Teacher Pam Kenney. “I kept it from them until I knew who made it and then let it out of the bag. They were upset, obviously.”
Kenney, along with several parents and even grandparents asked school administrators to change the date of the prom, but due to booking issues, it couldn’t be changed. Now the students had a tough decision to make -prom or All-State.
“It was hard when I found out because I love dancing so much, but then I thought about it. These are all my friends, and they’re all going to be at All-State, so I won’t have fun at the prom if all my friends aren’t there,” said Senior Zoe Hurst. “It’s a huge accomplishment to make All-State. It’s not a huge accomplishment to go to senior prom.”
Since the prom date couldn’t be changed, Kenney decided she would do something special for the students. “I had been checking on different things. The Springer Opera House in Columbus had “West Side Story,” so I called to get tickets.”
When Kenney told the people at Springer about what the students had given up, they provided complementary tickets and gave them seats on the fifth row. The Springer also offered a dinner before the show, but they couldn’t comp that because it’s served by a catering company. “I went to the principal and said, ‘the Springer is comping $45 apiece tickets, do you want to comp the $20 apiece dinner?’ And he said sure,” Kenney explains.
But Kenney had one more big surprise for the seven. “The limo was the most expensive thing of the evening. My high school choir teacher and her husband gave $200 toward the limo ride, and the youth pastor at my church gave $100. The parents kicked in some, and I kicked in some, too.”
It was a night to remember. The limo picked up the decked-out singers, along with Kenney, and drove them to the Springer, where the group ate a delicious meal and watched West Side Story. “It means a lot that people help pay for it. It wasn’t just the principal, but people from Ms. Kenney’s church and others who know her,” said Senior and Choir President Meredith Champion. “Random people from across the U.S. donated. We didn’t have to pay for it because other people care so much about what we do.”
When asked about Kenney, the group chimed in, “She’s hilarious. She is a great teacher.”
Born and raised in Opelika, Kenney has been the choir teacher at BHS for nine years. She also teaches choir at Samford Middle School. She said she feels like this is what God wants her to do. “When I was at Opelika High, I went to All-State, and when I heard the ‘Star-Spangled Banner’ song, it was so beautiful, and I said, ‘this is what I want to do. I want to be a choir teacher.’”
The group all agreed they’ve formed a special bond with Kenney. “She likes joking around, but at the same time, she can be serious, but because she can joke around, she makes us feel comfortable with her, but we’re respectful,” Zoe said. “It’s so important. Music is something that gets me through the day and helps lift me up.”
Kenney said these are some special kids. “I am not the best teacher or the best singer, but I feel I can light a fire under the kids, and maybe they’ll outdo me one day. That’s what I want to happen. I want them to surpass anything I taught them.”
Because funding is limited, the choir holds various fundraisers such as selling high-quality sheets, candy grams and bake sales to fill the choir accounts. Some of that paid for the All-State weekend, but there is always a need for the choir.
To donate, contact Mrs. Kenney at kenney.pam@lee.k12.al.us. Kenney explained, “The choir program is alive and well in Beauregard.”