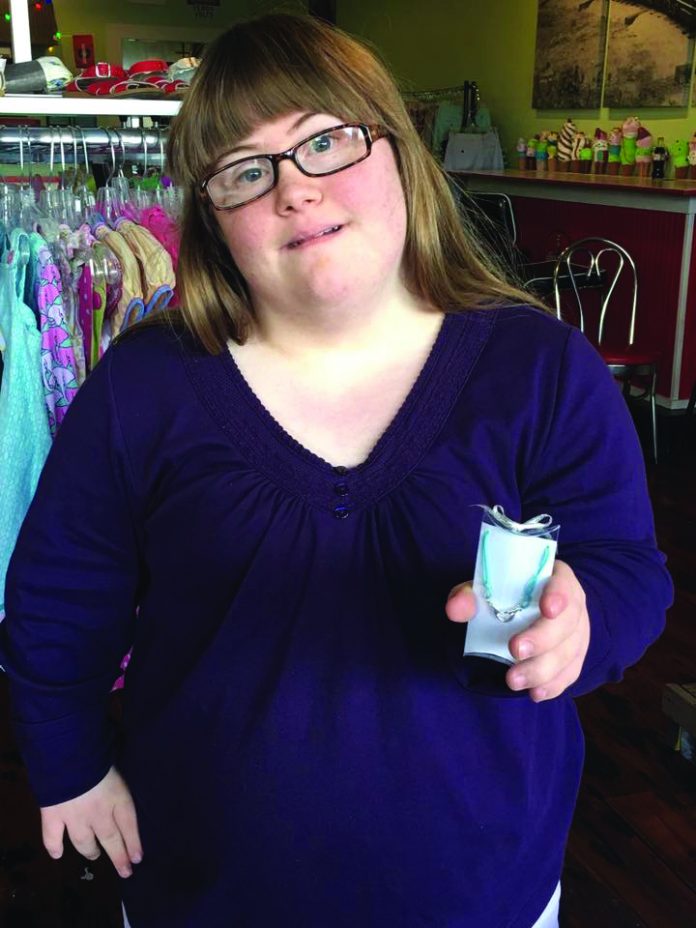 Makana Willis is a 15-year-old sophomore at Beauregard High School and a jewelry designer. She also has Down Syndrome.

Last fall when Makana’s mom, Pam, was working on the angel ornaments that she hand crafts and sells, Makana handed her mom a drawing of an angel. This drawing was one of the first indications that Makana had been watching her mom’s creative work closer than Pam thought.
Pam started letting Makana pick out which beads to purchase stating that they would sometimes spend hours looking through the online catalogs while Makana made her choices, voicing her preferences for necklaces, bracelets and earrings. It was during one of these searches that Makana found a butterfly charm that said “Butterfly Kidz” on one side and “I am special” on the other. “It became the inspiration for a new jewelry line designed by Makama,” Pam said.
With Makana’s choices made, Pam placed the first order for the new line. Once the basic designs were in placed, Makana began selecting each and every bead to go in each piece and her mom does the assembly work. She also drew the butterfly picture that is the logo for the line.
Recently, Pam approached Jennifer Graham, owner of Fringe and Fringe Kids in downtown Opelika and made arrangements to drop off some samples of Makana’s jewelry. During a follow-up meeting to discuss the possibility of carrying the Butterfly Kidz line, Graham addressed Makana about her jewelry. Makana took over and started showing off the pieces, telling Graham about each one.
“My heart swelled with pride as I watched her present and sell as if she had done it a thousand times. Not only did Makana design the line, she closed the deal,” Pam said.
Butterfly Kidz is now being sold exclusively at the Fringe Kids pop-up boutique located inside O Town Ice Cream located on S. Railroad Avenue in Opelika.
“Makana has a genuine interest in creating with me and shows promise of becoming a great artisan and business owner. It is a dream of mine to one day open a studio with her working with other talented special needs individuals so they too can share their creations,” Pam said.