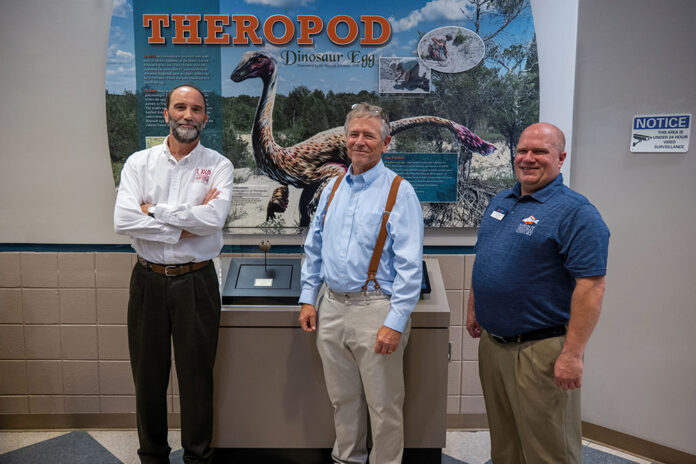 Thanks to a newly unveiled museum exhibit, visitors to Auburn University can travel back in time 82 million years.

Millions of years ago, a fragile dinosaur egg approximately 2 inches long washed out to sea and was protected in layers of sediment for an incredible journey. In the 1970s, the fossilized egg was discovered by a group of teens near Selma, Alabama. One of those teens, Prescott Atkinson, would later conduct a CT scan on the egg after completing medical school.

The dinosaur egg, which includes an intact embryo that is the most complete dinosaur specimen in the eastern United States, was unveiled June 1 in a public display in the Rouse Life Sciences Building, part of the Auburn University Museum of Natural History, or AUMNH, collections.

“It’s very unique, and there’s not another one like it,” said Jonathan Armbruster, director of AUMNH. “It holds great scientific value.”

Inside the Rouse Life Sciences building around the rotunda on the first floor, a wall display includes the dinosaur egg alongside an interactive tablet. Visitors can learn about the area where it was found and characteristics of the egg, and people also can view images from the CT scan and see the actual bones inside the egg.

“The egg can teach us a lot of things,” Armbruster said.

Scant information exists about dinosaurs that inhabited the eastern coast of the United States, mainly because the area is covered in vegetation that is unlike the western U.S.

“The egg was dated to 82 million years through radiometric methods that determine particular isotypes and date layers of sediments,” Armbruster said.

The once delicate egg now has a dense structure.

“Over time, the egg has become lithified or transformed into stone,” he added. “It had a complete shell, and no one actually knew what was inside.”

James Lamb from the Black Belt Museum at the University of West Alabama studied the specimen on loan from Auburn while working on his doctoral degree. He removed part of the shell that exposed the embryonic bones and continued the journey of this egg.

Atkinson, who originally found the egg as a teen and later became a physician, took CT scans, but medical scanners could not separate the bones from the rock.

“This egg shows why museums are important,” Atkinson said. “It is now preserved for people to see it and lets us teach people more about the fascinating role of science.”

The egg traveled to Grenoble, France, to undergo more detailed X-rays at the European Synchrotron, where the digital images could be extracted to identify the bones and confirm this specimen as an actual dinosaur egg.

“The fact that Atkinson was at the right spot 82 million years after the egg was deposited in sediments is absolutely amazing,” said Armbruster.

Toni Bruner, AUMNH, and Ray Wilhite, Auburn University College of Veterinary Medicine, also have made contributions to this project.

“This specimen is preserved for all time, and now anyone can learn more about it,” Armbruster said.