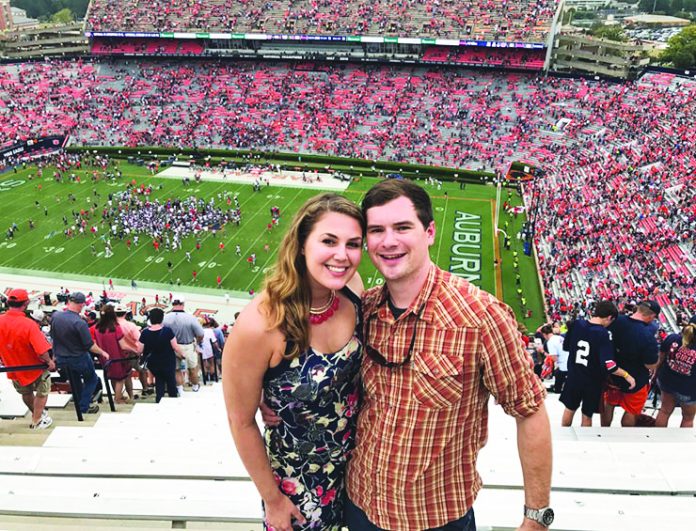 An Auburn couple’s dream wedding is becoming reality thanks to winning Johnsonville’s “Tailgate Wedding Contest” earlier this year.
Former Florida quarterback and college football analyst Tim Tebow announced the nationwide contest prior to the SEC Championship Game between Auburn and Georgia last season. Submissions were to come from engaged SEC fans who were asked why they deserved to have their own “tailgate wedding.”
Chosen out of 386 entries in late May, Frank Pierce and Sophie Roth will receive a fully equipped tailgate, one-of-a-kind wedding experience and possible appearance from Tebow at the ceremony on Oct. 13, the day of Auburn’s home SEC tilt v. Tennessee.
“My grandmother always told me to enter contests, because, ‘you never know you might win.’ One day I had an idea to look up wedding contests, and so I just googled wedding contests,” Roth said. “The first one I saw was ‘Johnsonville Tailgate Wedding Contest’ (and) I looked at the website. I watched the adorable video of Tim Tebow and thought, ‘hmm…. well why not. This is kind of perfect.’”
The couple originally planned their wedding for Sept. 8, 2017 at St. George Island, Florida, but Category 4 Hurricane Irma forced a major change of plans. Making landfall the day before their wedding, the couple was forced to evacuate the island and cancel their wedding.
“Love at first pot roast”
Pierce and Roth both attended Auburn, but did not meet until after finishing their undergraduate degrees.
A psychology major, Roth was in graduate school for clinical mental health counseling when she said mutual friends set her up on a blind date with Pierce, who was working as an engineer for Neptune Technology Group in Tallassee.
“Frank took me to dinner at Live Oaks and we walked and talked downtown afterwards. On our second date, (he) cooked me a pot roast with all the trimmings,” Roth recalled. “For this starving graduate student, it was love at first pot roast.”
After nearly three years of dating, the couple got engaged in January 2017. Growing up in Alabama and recognizing the importance of college football in the state, Roth said careful planning was made for their wedding to not interfere with Auburn’s or Alabama’s gridiron contests that weekend.
Homecoming
With fewer than 10 weeks until their wedding, Roth said the planning is going smoothly, recently finding the perfect dress to wear along with a venue on the school’s campus.
Despite their arduous journey toward a wedding, Roth said she could not have picked a better story or place for their married life to begin.
“It has been like a dream come true. It is surreal that we are going to get married on Auburn’s campus,” Roth said. “To us, Auburn is truly a special place where we found ourselves, found each other and found a home.”
To keep up with their wedding planning journey, follow Johnsonville’s social media accounts or YouTube channel.