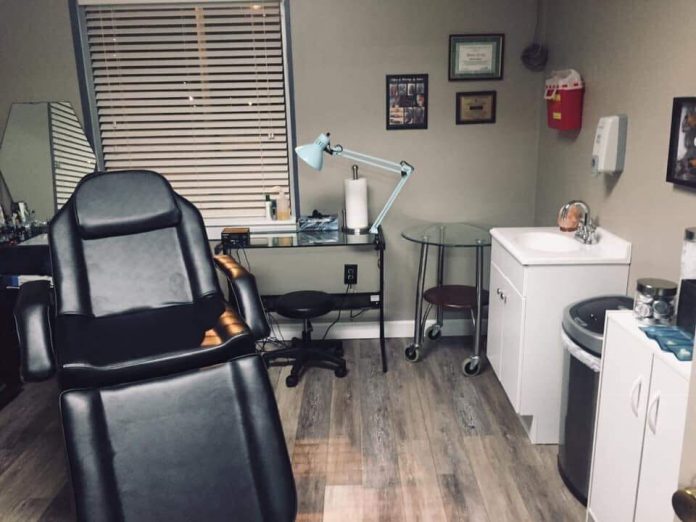 Art with a purpose and expression of self are two common themes of Ascension Tattoo and Art Studio, located at 100 N. 7th St. in downtown Opelika.
The shop is owned and operated by Auburn resident Amber Kirby, who has more than 13 years of tattooing experience. In addition to providing “a caring, quality and experienced” custom tattoo experience, she offers tattoo consults and drawings, cover-ups and fix-ups, microdermals, micropigmentation and piercings, among other services.
“Most people say that the best thing I have to offer is my attention to detail. I listen and I pay attention and my goal is to create what you want, not what I think looks cool or great,” Kirby said.
Hailing from Williamston, Michigan, Kirby was involved in band, cheer and dance in her high school years. During that time, she also cultivated an interest in graphic design, a skill set that would pay dividends later in life.
After graduating in 2000, Kirby moved to Pensacola, Florida to live with her father. She worked several different jobs and eventually apprenticed at a tattoo parlor in the city, honing her craft as a body piercer.
In 2004, deadly Hurricane Ivan wrecked Pensacola, leaving Kirby displaced by the storm. Briefly relocating to Birmingham, she tagged along with a friend to be his roommate at Auburn University the following year.
Kirby continued her piercing career at Shenanigan’s Tattoo Parlor in Auburn. Nearly two years later, a conversation with her father persuaded her to make a change.
“We were talking on the phone day and he asked me why I hadn’t tried tattooing … he told me that my experience would lend to being good at it and be a bigger money maker. He gave me a machine and I practiced quietly for a while before I felt confident enough to do it,” Kirby said.
Thirteen years later, Kirby finds herself as one of the area’s most respected tattoo artists.
Originally, owning her own shop seemed impossible, but friend and local businessman Derek Brown helped Kirby convert the long-shot dream into reality. After selecting her space last September, Kirby and her wife Aiden, Brown and others spent the next month revamping the space from its previous capacity as an insurance agency into a full-fledged tattoo parlor.
Kirby celebrated the business’s grand opening last fall but faced zoning complications with the city, forcing the shop’s closure from October to early last month. Now, with those problems alleviated and full support from the city, she said she is excited for her business’s future.
“Tattooing isn’t weird now. I can cross the traditional and new boundaries in this art form … I don’t specialize, I do everything,” Kirby said. “I can’t judge what people like or want, because I know that a big, burly guy might come in but want a lily for his little girl. People like him have a story and a need to express themselves and this gives them that outlet.”
In addition to the parlor, Ascension features an art gallery with representation from mostly local artists whose works represent a wide range of mediums. Soon, she will begin offering free or at-cost art classes at the shop from art experts.
Kirby, mother of a son with autism, is heavily involved with Opelika resident Luanne Helms in the activity and event planning for the Autism Society of East Alabama. She said her shop will be open for meetings and gatherings where children can play and parents share their daily struggles and victories.
“We want this to be an inclusive place for everyone in our local special needs community,” Kirby said.
Ascension’s walk-in hours of operation are 2 to 8 p.m. Tuesday through Saturday. Appointments can be made be made 9 a.m. to 9 p.m. seven days a week, but require a $50 deposit and consultation.
For more information, call or text 334-221-0211, like and follow “Ascension Tattoo and Art Studio” on Facebook or visit www.ascensiontattoo334.com.