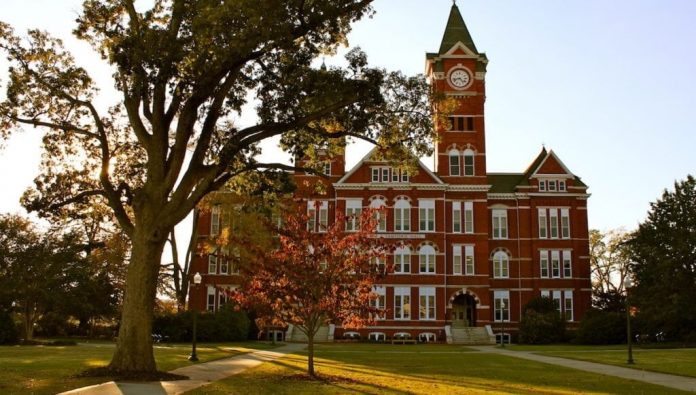 And Auburn University’s Becoming the Beloved Community is still working to carry on his legacy.

“Fifty-three years ago tonight, the United States and the world mourned the loss of the drum major for justice, the Reverend Dr. Martin Luther King Jr,” said Dr. Joan Harrell, founder of the Becoming the Beloved Community movement.

Becoming the Beloved Community met last Tuesday to commemorate the 53rd anniversary of King’s death and discuss the importance of Black Sacred Music.

“My father was a farmer, a sharecropper in the rural South,” Otis Moss Jr. said. “He served in the military during the first World War. Always a man of dignity, quiet courage and determination.”

“I imagine as my grandfather walked, the sounds of the world crept into his ear, ‘You are a second-class citizen, you are 3/5ths of a person, you are nothing but a negro,’” Otis Moss III said. “But in his spirit, he heard his faith and his songs say, ‘Ain’t going to let nobody turn me around.’ Not just walking, but marching, to the next polling place.”

Once again, Otis Moss Sr. was turned away, sent to another location, where he was told the polling location was closed.

“Wounded, but never given up,” Otis Moss Jr said. “Denied, but never accepting that denial. Insulted, but refusing to accept the insult inwardly. And thereby setting an example and a memory for generations unborn.”

Otis Moss Sr. was killed in a car crash, Otis Moss Jr. said. He said that soon after his father’s death, he joined the Civil Rights Movement and was present when the voting rights deal was signed in 1965.

“That was a great moment, it was a great victory in the civil rights struggle, it was a great accomplishment,” Otis Moss Jr said of the voting rights deal. “However, no one could dig up our father’s bones and put a ballot in his hand.”

Otis Moss Sr.’s reality was not unique. The Becoming the Beloved Community discussion was based around the importance of music to the Civil Rights Movement, and to enslaved African-Americans.

“The music gave inspiration, aspiration and it also created a special kind of unity for we could hear each other, share with each other, speak to each other in the music of the Black experience, the African American experience,” Otis Moss Jr. said.

Before the Civil Rights Movement, songs were used by enslaved people to communicate. And although music was a form of self-expression for enslaved people, the messages were often hidden, said Rosephanye Powell, professor of voice.

“Whether they were [messages] for freedom, for revolt, whether they were expressing our aches, our heartaches and our pains, all the master heard was that we were happy slaves singing these religious songs,” she said. “And this carries over to the civil rights movement, that these songs were bonding those who knew them together.”

But, the power of music was visible. In fact, drums were outlawed when Africans were originally enslaved, Otis Moss Jr. said.

“And only those in spiritual unity could understand what the drum was saying in our songs, our music, our prayers, our sermons, our plans and our protest,” he said. “That is tremendously significant.”

Fast forward to the crux of the Civil Rights Movement in the 1900s and the songs were used to unify participants and to boost morale.

“It is not difficult to imagine how easy it would be, having been beaten or hosed or observing the girls in Birmingham being killed in bombings, being threatened, just as Dr. Moss’ father, being turned away to vote repeatedly, having to walk for miles during the bus boycotts. It would be easy for morale to be low and people to be tempted to turn back,” Rosephanye said.

The songs, too, were used to comfort those who lost loved ones to the movement, she said.

“There’s something unique and powerful that is hidden within the sonic resonance of black musicality,” Otis Moss III said. “And what is unique, especially within the Black church tradition, is that within the music, the music, not only the words, but the sonic power, carries a theological message that speaks of liberation …

“The Civil Rights Movement understood that in order for us to understand voting rights, we can’t just say it, we’ve also got to sing it.”

“It’s well known, or it should be, that legislative bodies all over the nation are passing foolish, yet demeaning and disenfranchising laws,” he said. “Look at Georgia and look at other places, for one specific purpose. To keep us, people of color, from voting. Gerrymandering districts to guarantee a white majority.”

Becoming The Beloved Community is an ongoing movement in the Auburn area, led by Harrell. The next virtual meeting for the community will be held on April 20 at 6 p.m. and will discuss Becoming the Beloved Community amid Hatred Crimes against Asians and Asian Americans.

“The struggle continues,” Otis Moss III said. “Just because we win a battle, doesn’t mean we sit on our laurels. We have to continue to fight to make sure that the next generation will have opportunities in the future.”