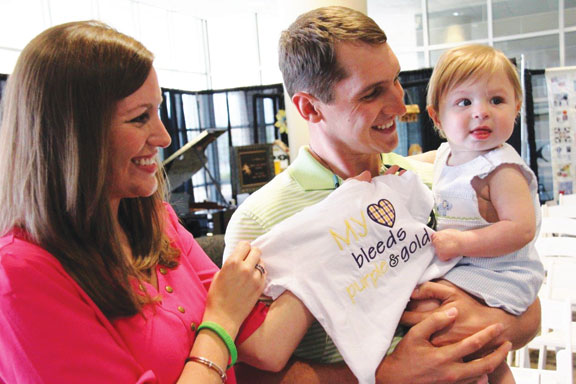 On Nov. 30, 2015, Jonathan and Holley Perry of Monroe, La., said goodbye to their six-month-old son John Clarke, who suffered from abnormal vessel malformation. On the same day of their son’s death, the Perrys made the decision to donate his organs, and John Clarke’s heart was transported to Alabama to save the life of Tucker and Amanda Boswell’s five-month-old son Davis, of Auburn. Davis had been awaiting a heart transplant for more than 100 days.  “We almost lost him,” Amanda said. Last Tuesday, emotions ran high as the Perrys and the Boswells met for the first time. According to Amanda, it felt as though the two families had known each other for a long time.  On Wednesday, the families met in the East Alabama Medical Center Chapel and later shared their stories in a ceremony held in the EAMC lobby. The purpose of the ceremony and the testimonies of the two families was to encourage organ donation. Lisa Harmon, supervisor of EAMC’s Organ Donor Council said she believed the two families were able to meet because of the help of EAMC.
Jonathan and Amanda spoke to the audience about the effects organ donation has had on their families. Jonathan recalled the great six months he and Holley had with John Clarke and how his sickness hit suddenly. Upon John Clarke’s death Jonathan said Holley insisted that his heart be donated. Although doctors told the Perrys that six-month-old hearts are rarely needed, Holley was adamant that the hospital staff find out if there was a need for the heart. As it turns out, Davis was barely hanging on in Alabama. When the staff told the Perrys that there was a possibility that they found a recipient, Jonathan said “We’re going to do it. We’re going to give it to them.”
Davis was suffering from enterovirus and had been in the hospital since he was two days old. “I think this is just another testament about what God can do. This was not on accident. God planned it that way,” Amanda said. “People ask me all the time how we got through this, and God is the only thing I can tell them.” She added that she and Tucker will never be able to express the gratitude they feel in their hearts for the Perrys.
At the ceremony, the Perrys, who are LSU fans, gave Davis a shirt that said “My heart bleeds purple and gold.” The ceremony wrapped up with a balloon release, and the Perrys raised a flag on the grounds of EAMC honoring organ donation.