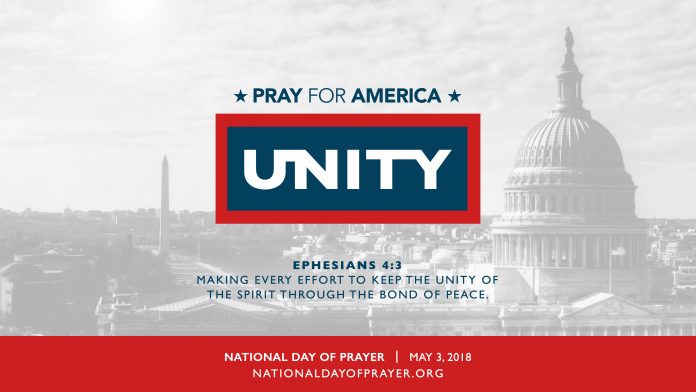 Prayers for unity in Opelika, the United States and the world will be lifted up during the 67th “National Day of Prayer” event May 5 from noon – 1 p.m. at Courthouse Square in downtown Opelika.
The basis for this year’s theme of “Unity” is excerpted from Ephesians 4:3, which reads, “Making every effort to keep the unity of the Spirit through the bond of peace.”
Laura Fuller, one of Lee County’s “National Day of Prayer” organizers, said it is imperative that people turn to God in a world filled with violence and animosity.
“With all the recent mass shootings and hatred toward each other, just in our own nation, we really need to pray for a spirit of unity and the peace that only Jesus Christ can give us,” Fuller said. “We just urge people to come out and show support for our God.”
During the service, there will be messages from area ministers and music from gospel singer Nigel Andrews and the Power of Praise Church of Deliverance’s choir. Opelika Mayor Gary Fuller and a representative from the City of Auburn will also read proclamations declaring May 3 as a “National Day of Prayer” in both cities.
The “National Day of Prayer” stems from a joint resolution passed by the United States Congress and signed into law by then-U.S. President Harry S. Truman.
The City of Opelika and ESG Operations Inc. will provide chairs and tents for the event. In case of rain, Fuller said it will be moved to First Baptist Church of Opelika, which is located at 301 S. 8th St.
Those unable to attend can listen to a live broadcast of the event on Hallelujah 910 AM.