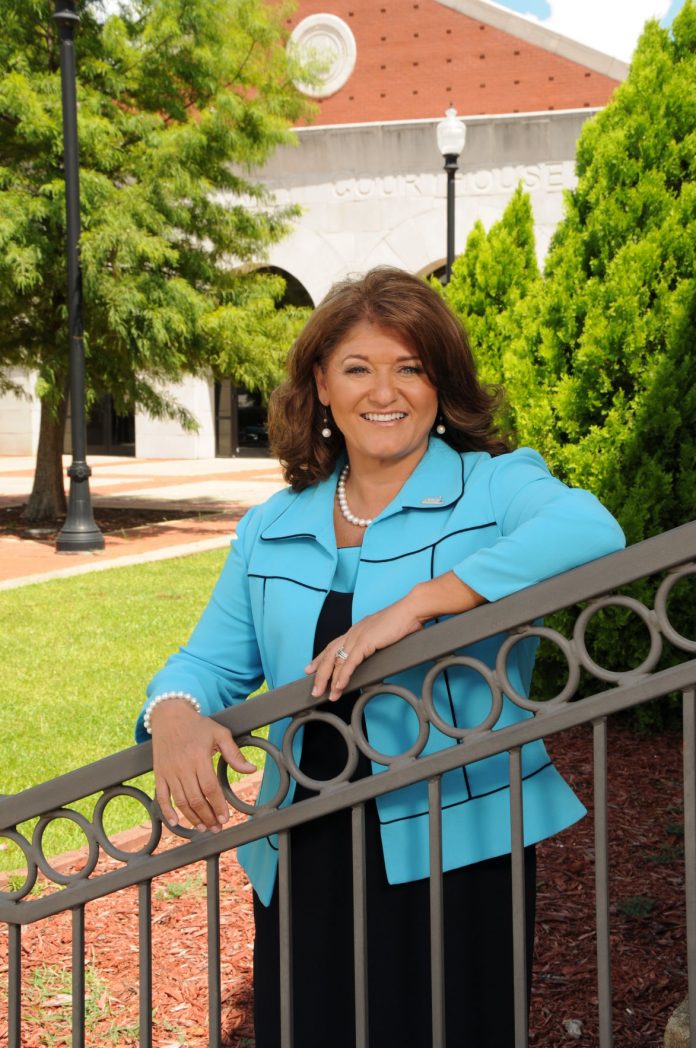 Increased career opportunities and improved infrastructure throughout District 38 are just a few of the goals of Chambers County native and House District 83 Republican nominee Debbie Wood.
From 2002-2018, Wood served as a member of the Chambers County Commission before declaring her bid for the open District 38 seat. She survived the closest election in the state this election season, defeating Republican opponent Todd Rauch by seven total votes in a provisional ballot count ceremony July 24 to verify runoff results.
Following is a brief background on Wood and overview of her beliefs and platforms if elected.
Background
Born in Chambers County, Wood and her family relocated for her father’s construction career to Stewart, which is located near Miami, Florida.
Several years later, her family returned to the area so her father could open his own construction business. She attended Beulah High School, starting the school’s first flag corps, and graduated as the school’s salutatorian for the class of 1984.
Wood pursued a career in real estate, and now owns her own agency through Century 21, which is based in Valley.
After the retirement of longtime District 38 Rep. DuWayne Bridges, Wood said she contemplated a run but knew the time was not right. Isaac Whorton went on to hold the seat for a term and is now running for a seat in the 5th Judicial Circuit.
Initially, District 38 was a three-horse race on the Republican side, with Rauch, Wood and Bryan Murphy all vying for the nomination. Not receiving a 50-plus percent majority, Wood and Rauch were forced into what would later be regarded as a historic runoff election.
Platforms
Creating lasting, viable jobs is Woods’ top priority for her constituents. Through improving infrastructure and providing the area’s youth with expanded access to vocational training, she said she believes this will help to solve a major problem within District 38, and in particular, Chambers County.
“A job is capable of giving someone hope, and not only good for the community, but the person. If you’re able to pay your mortgage or your rent, make your car payment and take your kid to McDonald’s, you just feel good about yourself,” Wood said. “And for our kids, it’s not necessarily about how much money they can make, but helping them find what their passion is. Some are more equipped to work with their hands, others with their head. But, we have to make sure that there opportunities through the industries we draw here to find a way to help them want to stay here.”
Improving infrastructure is another important issue for Woods. During her time as a member of the Chambers County commission, she said she helped lead and plan the repaving of some of the area’s worst-kept bridges and roads.
“If we’re going to grow and be a new hub for industries, promoting all kinds of things to happen in the state of Alabama, we have to have good roads and good bridges and they have to be safe. We have to have a good route of transportation and that is not something that we’ve been focused on,” Wood said.
Wood also wants make improvements to the education system through the hiring of teachers and addition of virtual classroom technologies to address the problematic student-to-teacher ratios in some of the area schools.
For those still deciding between Wood and her Democratic opponent Brian McGee, she said voters can count on her love for the district that she has called home for most of her life to prevalent in every decision she makes in Montgomery.
“If you’re looking for a candidate that loves our community, that believes Alabama is the best place to live, that believes that we need to do everything we can to educate our children but keep them home, then you need to vote for me,” Wood said.
For more information on Wood and her campaign, visit www.debbiewoodstaterepresentative.com.