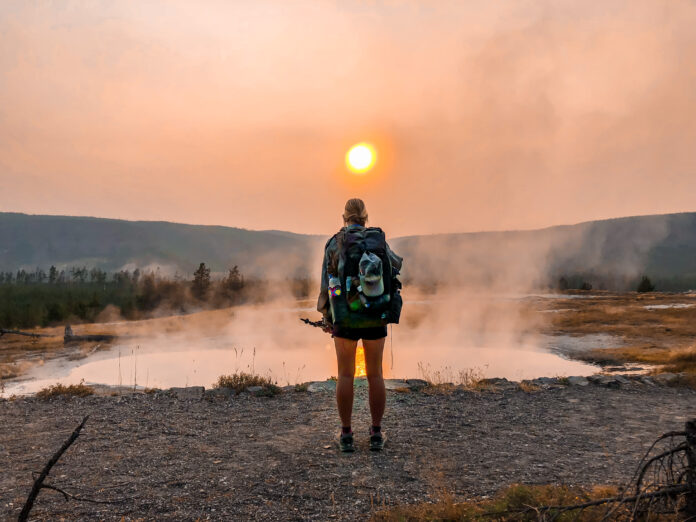 Can you imagine strapping on 25-pound pack, lacing up a pair of hiking boots and heading into the woods for a six-month trip — all without ever having gone backpacking before?

That’s what Jessica Mills did for her first backpacking experience; she fulfilled a childhood dream.

“When I was a little girl — I was probably around five years old — I would go vacation a lot up in the North Carolina area with my family,” Mills said. “And we were standing at the Newfound Gap area one day … it’s up in the Smoky Mountains and it’s on the border of North Carolina and Tennessee. I remember being super excited that I could stand in two states at one time; it blew my mind.

The thought transfixed Mills, and at five years old, she tried to convince her mom to walk the Appalachian with her that day.

“That’s just something I really wanted to do from that moment on,” she said. “And she told me, ‘Well some day you can do that.’”

Mills kept the dream in the back of her head for years but wasn’t able to make it happen until a few years after her graduation from Auburn University.

“One day, I just woke up and I was 28 years old and I felt like I had done everything that society says you should do to be successful and happy,” she said. “You know that’s what we tell our young adults, like this is the path. So I took that path and it’s just not for everybody. Because I woke up and I’m like, ‘Man, is this all?’”

She started thinking back to her childhood goal of hiking the Appalachian Trail (AT) and wondering if maybe she should quit her full-time job in Colorado to pursue that dream.

Contemplating the idea, Mills happened to run into a man at a restaurant who was a backpacker. All the tables in the place were full, and he sat with Mills and her coworkers.

He shared his story of hiking the entire AT the year before, and Mills took it as a sign.

Three months later, in November, she moved back to her hometown of Opelika and prepared to hike the Appalachian Trail.

“By March, I was on the AT, and I had never been on an overnight backpacking trip,” she said. “The Appalachian Trial takes approximately six months to complete. It’s around 2,200 miles and most people go from Georgia up to Maine, and so that’s what I did.”

For those unfamiliar, when backpacking, you need to pack everything you will use into the one pack on your back. This would include a place to sleep, either a tent or hammock; food; cooking supplies; clothes and anything else you might need.

Mills, having never been backpacking before, had to learn everything on the go.

“The first night I was like, ‘What in the hell have I gotten myself into?’” she said.

She did try to prepare by watching videos and reading blogs about what the experience would be like. While on the trail, Mills decided she should start sharing her own experiences too — in the form of a YouTube account.

Mills said she’d been toying with the idea of a blog, but a friend suggested vlogging the trail instead.

The idea, apparently, was a good one. The backpacker’s YouTube channel, Homemade Wanderlust, has 328,000 subscribers now.

There were all kinds of new experiences to be shared: hitchhiking into town from the trail, learning that she preferred a tent to a hammock, filtering water from a stream.

The trail takes six months to complete, so you can’t carry everything you’ll need all at once. Every few days, backpackers have the opportunity to make their way to the nearest town and stock up on supplies.

This was also Mills’ chance to upload the recent footage she’d taken.

“I have somebody who edits the videos for me so what I do is when I get to a town … I recharge everything up, but I have battery banks that I carry with me … and then once I get to a town, I connect to Wi-Fi, or just use my LTE, and I upload the video clips to Dropbox and then he takes them from there and edits them into a video.”

The YouTube channel became popular, and it was able to sustain Mills’ backpacking lifestyle.

“It’s become more interesting to me to try to help people have that experience sitting at home, and whether that’s just to encourage them to get out and do it themselves, or I don’t know. It’s kind of like other people create art, paintings or music, and my thing is just capturing these experiences and sharing them with people that maybe would never see them otherwise.”

Although Mills started the trail alone, there were plenty of friends along the way.

“I kind of felt like people were going to judge me, like ‘This girl is an idiot. She has no idea what she’s doing.’ But it was actually not like that; people were very helpful.”

Mills had a taste of what backpackers call “trail magic.”

“There are people who will do what’s called, ‘trail magic,’ and they’ll show up where the trail crosses a road, or a random dirt road in the woods or whatever and they’ll cook. They’ll make hamburgers and so you walk up and there’s a stranger that’s like, ‘Hey, you want a hamburger?’”

During trips into town for supplies, Mills discovered that often strangers will open their homes to backpackers for a night, for a place to sleep or a hot meal.

Sometimes backpackers will hike a section of the trail together, so they end up seeing each other a lot, becoming friends.

Mills met all kinds of people too, people who helped her appreciate things and grow as a person, she said.

“When you’re out there in the woods and you’re sitting across a campfire from somebody who’s got a different religion from you or different politics, you don’t care about that,” Mills said. “And even if you do talk about it, it’s much different than the world that we kind of live in, this synthetic world. It’s not social media; it’s real.”

On the trail, the focus is the basic necessities, Mills said. The backpackers worry about what they will eat, what they will drink and where they will sleep, not about the things most people tend to stress about in their daily lives.

“When I walk into a store and it’s raining, I don’t care about an umbrella, I’m just glad I don’t have to sleep in it,” she said.

That first trip led to many more, and you could now call Mills a full-time backpacker.

“I was kind of going on the trail to get away and think about life, but I didn’t really know that I was already kind of starting the next chapter,” she said.

After the Appalachian, Mills took a little time off before starting on her next trail, the Pacific Crest Trail and after that, the Continental Divide Trail, completing the Triple Crown of Hiking.

She’s also had some international hiking experience; Mills and her sister completed the El Camino de Santiago in Spain. This experience was a little different. The two stayed in hostels at night rather than in tents.

Mills was supposed to hike a trail, the Te Araroa, in New Zealand this year, but the worldwide pandemic put a stop to those plans.

Instead, she’s been working on completing the Pinhoti Trail.

Mills backpacking memories are experiences she could not have had anywhere else.

“l’ve been bluff charged by a bear,” she said. “I’ve also stared at a mountain lion for a minute and a half. We had like a whole stare down.”

Once, while on the trail, Mills said that she and a friend were talking to a group of day hikers, a dad and his two children. One of the children asked Mills if she wanted a Cheeto.

“I was like, ‘no sweetie, it’s okay, that’s your Cheeto,’” Mills said she told the girl. “She offered me a Cheeto, even though I really did want it. The food in my pack was getting pretty low and it was still another day until we got to town. So I wanted the Cheeto.”

While Mills and her friend talked with the family, the girl happened to drop one of her Cheetos.

“I looked at my friend. I noticed my friend see the Cheeto hit the ground. And I saw the Cheeto hit the ground. And it was this mutual understanding that as soon as they left, it was going to be a race for the Cheeto, an olympic-style battle over the Cheeto. So, this man’s talking, and I cannot even remember what he was talking about because all I was focusing on was the Cheeto. Anyway, he was about to leave, and he’s like, ‘Alright guys, well let’s go ahead and get out of here,’ and he starts packing up their stuff and he starts walking away. And then he stops, and kind of stiffens up and he turns back around and comes over and picks up the Cheeto and says, ‘Leave no trace.’ And we just both died inside.”

Mills can recall the story now with a laugh, but it is a prime example of life on the trail.

Anyone who wants to watch more of her trail experiences or see scenes from the different treks can follow along via Mills’ YouTube channel (https://www.youtube.com/channel/UCQhqmV26773qZhzqJz4VFcw) or her Instagram (https://www.instagram.com/homemadewanderlust/?hl=en).

It all started years ago with seeing a sign for the Appalachian Trial. Years later, she did it, the full 2,200 miles.

“Only 20% of the people who start out on that trek actually finish, so for sure, accomplishing that is something that I think builds a lot of confidence in somebody.”