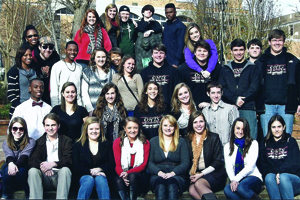 The Opelika High Theatre Society (OHTS) walked away with four outstanding awards when it attended the Trumbauer Alabama State Theatre Festival, held in Florence on the University of North Alabama’s campus Dec. 1 through Dec. 3.

Two acts in the Novice division were awarded first place: Thomas Burns and Jonathan Johnsick in the Duet Dramatic Acting Classical category and Auburn Terry and Emily Johnston in the Duet Comedic category.

Revel Gholston, director of the OHTS, said he was pleased by the performances from all of the theatre society’s members during the competition.

“I have never been more proud of a group of actors that I have taken to Trumbauer,” Gholston said. “It was a very young group, and the fact they met all of the expectations set by previous society members is very inspiring to see what lies down the road.”

Several OHTS members said they saw the state competition as a way to improve and hone their own skills.

“I got to improve my acting from observing other actors,” Mary Grace Sasser said.
Acton Cole agreed.
“It brings out the best of me. I’ve lost a lot of emotion and gained a lot of respect,” Cole said. Gholston and the OHTS have taken a one-act performance to Trumbauer for the last five years, and this year’s entry, Gholston and former OHTS member Wesley Ballew’s self-written musical “Take the Repeat,” was one of 18 one-acts performed at this year’s competition.

Cast member Ashley Robertson was recognized for her performance in “Take the Repeat,” with an All- Star Cast Member award.