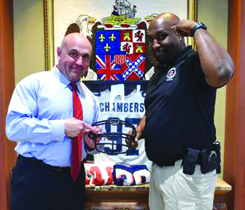 By Skip Tucker
Director of Development and Special Publications

Tyler Whitten to take over as Auburn Public Library Director