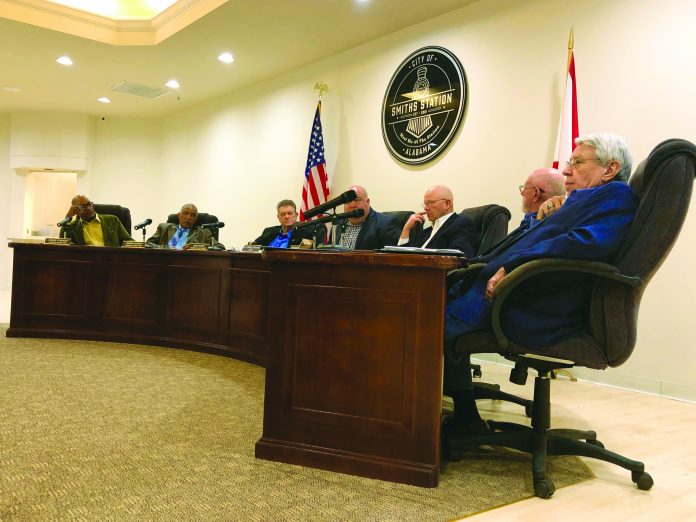 At Tuesday’s city council meeting, Smiths Station joined Auburn and Opelika in declaring a “Local State of Emergency” in response to the COVID-19 pandemic.
The council’s five members, Richard Cooley, Morris Jackson, Dick Key, James Moody and George Stringer, participated in the meeting via conference call, which is permitted for governing bodies statewide per Gov. Kay Ivey’s first supplemental State of Emergency issued on March 18. It was also live-streamed for the public’s viewing on the city’s Facebook page.
All five members along with Mayor F.L. “Bubba” Copeland voted unanimously to pass the measure, which will remain enacted until April 13. Copeland said that date may change based on the virus’s reach and spread during the next few weeks.
“This resolution will allow us to help with repairs and rescue citywide during an emergency like this. It includes but is not limited to the local bid act, which allows the mayor and the other members of the Executive Committee the powers to do what’s necessary with the city’s funds to help in times of crisis and emergencies,” said City Clerk Scott Johnston.
Following the vote, Copeland reminded council members that if he were to become ill, city leadership would pass to Place 2 Member and President Pro Tem Morris Jackson.
The council’s only other vote was to approve the minutes from the March 10 meeting. Because of state rules, they were only limited to voting on two agenda items, and had to table approving February’s financial statements until the April 7 meeting.
Before asking the council to make a motion to adjourn the meeting, Copeland took an opportunity to remind Smiths Station residents of how they can help “flatten the curve” and spread of COVID-19 within their city, which has yet to see a confirmed case.
“Please use best business practices, please use best distancing practices, please avoid going into the public if you have to. Let’s get a hold of this,” Copeland said. “Please wash your hands, please use sanitize, don’t buy impulsively. Let’s just get through this the best we can.”
The Smiths Station City Council regularly meets on the second and fourth Tuesday of each month with a work session starting at 5:30 p.m. Eastern time followed by their regular meeting at 6 p.m. Their meetings are held within the council chambers of the Smiths Station Government Center, which is located at 2336 Lee Road 430. For more information, call 334-297-8771 or visit www.smithsstational.gov.