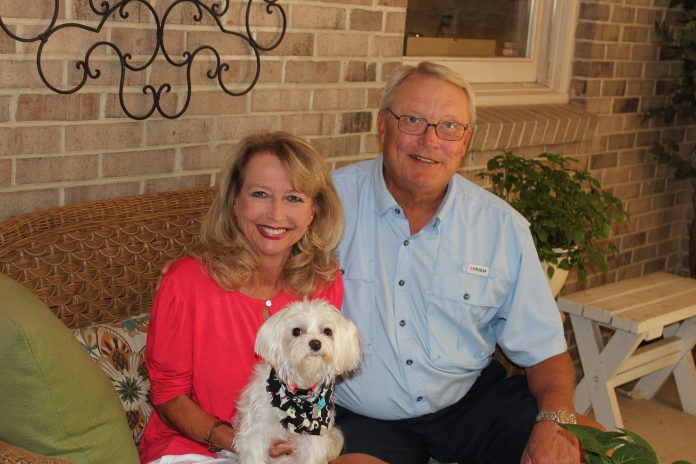 Janet and Jerry Scott enjoy staying busy with children and grandchildren and preparing their favorite dishes when they visit. While Jerry grills and fries fish, Janet will prepare special sides and desserts. Both their mothers were excellent cooks and have passed down their recipes in the family.
On a recent visit to their lovely home, Janet arrived at the door with their sweet Josie, who likes having her picture made, barking when the flash goes off.
Janet and Jerry both grew up in Alexander City and started dating in high school. They both attended Auburn University and were married at the start of their last quarter. Janet graduated with a bachelor’s and master’s degrees in elementary education, while Jerry received a bachelor’s degree in textile management.
After graduating, they moved to Opelika. Jerry went to work with West Point Pepperell Manufacturing Company where he was employed for 32 years. When the company closed, he worked at Hyundai for seven years. He now works part-time for KIA.
Janet taught school for over 38 years in Lanett as a classroom teacher and then as a reading coach for the system. Since she retired in 2014, she has been doing contract tutoring in reading at Morris Avenue Intermediate School in Opelika. She works with small groups of third, fourth and fifth grade students. “I love this work,’ she says.
Jerry was a Little League baseball coach for a few years off and on. He coached their son Jeremy for several years.
The Scotts have two children and two grandchildren. Their daughter, Hayley, has a son, Carson, 16, and lives in Hoover. Their son Jeremy and his wife, Neah, have a son, Jep, who is 22 months. The family recently moved from Auburn to Montgomery.
Both Janet and Jerry enjoy making their mothers’ recipes for their children. Janet learned to cook from her mother and remembers being in the kitchen watching her prepare meals. Janet especially enjoys baking her mother’s Red Velvet Cake during the holidays as well as preparing other favorite dishes passed down by her mother.
Jerry prepares his mother’s homemade Brunswick Stew. He will cook the pork in a crock-pot and boil a chicken until tender. Although it takes time to prepare, it makes a lot that he freezes in quart bags. It is great to have on hand during football weekends or as warm comfort food at the end of a hectic, chilly day. He also gives the stew as gifts.
Jerry’s brother was an excellent cook and owned a small café, Airport Café, at the Alexander City Airport. Jerry would help him at the café. His brother served barbecue with a mustard based sauce and made a similar Brunswick Stew recipe.
His parents always had a large garden, and his mother would freeze fresh vegetables.
Jerry enjoys hunting, fishing and playing golf. After he has gone fishing, he filets the fish and dips them in a light batter. He will set up three Fry Daddy’s outside to fry the fish, onion rings and French fries. He enjoys cooking the fish for family and friends.
The Scotts had a small garden when they first got married. Janet would can tomatoes and make pickles from cucumbers in the garden.
On busy days, Janet will make the Wild Stir-Fry Chicken Skillet that goes together quickly. The chicken breasts are browned and then the rice and seasonings are added with onion for a tasty entrée in minutes.
Their children’s favorites include Poppy Seed Chicken Casserole, Janet’s Mother’s Chicken Spaghetti, Spaghetti and Meat Sauce and Green Beans and Corn Casserole. Now that school has started and fall is just around the corner, these hearty casseroles are great to prepare ahead and have on hand.
For a yummy dessert, the Four-Layer Chocolate Delight is wonderful to make ahead ready to serve. The Shoney’s Strawberry Pie is a popular dessert, as well as the Blueberry Cobbler served with ice cream.
A friend gave Janet the recipe for the Chocolate Peanut Clusters made with dry roasted peanuts, German sweet chocolate, milk chocolate and white almond bark. These are good to have on hand during the holidays. Another favorite recipe given to Janet by her friend is the Ramen Cole Slaw, which is a delicious side dish that she likes to serve with meals.
Now that they are semi-retired, Janet and Jerry enjoy traveling and spending time with family and friends. They recently took a cruise and spent time relaxing at the beach.
The Scotts enjoy visiting their children and children, as well as having them visit. The children look forward to savoring family favorite dishes, and Janet will often take them a casserole when they visit.
Clip and save the following recipes to prepare for your family when you need a delectable casserole, hearty pasta dish or scrumptious dessert.

Poppyseed Chicken Casserole
3 chicken breasts, cooked
2 cans cream of chicken soup (add a little water)
(Heat soup before putting it on casserole)
Box of Ritz crackers (crushed)
Poppy seeds
Slivered almonds
1 stick margarine
First, put layer of crushed Ritz crackers into bottom of 9×13 casserole dish.
Then sprinkle a few poppyseeds on top. Next, place the shredded chicken over the crackers, then put another layer of crushed Ritz crackers, cover it with the soup, and top with more poppyseeds
Melt margarine and mix with crushed Ritz crackers. Spread over top and sprinkle some slivered almonds over the cracker mix. Cook on 350 degrees for about 30 minutes or until brown.

Jerry’s Mother’s Brunswick Stew
3 lbs. chicken
3 lbs. Boston butt pork
3 lbs. hamburger meat
4-5 (28 oz.) cans tomatoes
3 (14 oz.) cans cream corn
1 pkg. frozen kernel corn
3 (20 oz.) bottles ketchup
Juice of one lemon
Hot sauce to taste
Worcestershire sauce to taste
Pork broth (2-3 cups or more)
Salt and pepper to taste
Boil the chicken and cook the pork in a crock-pot, then chop up both. Brown the hamburger meat in a skillet and drain. Transfer the hamburger meat to a 3-4 gallon large pot. Cook on low to medium-low heat.
Add tomatoes and cream corn and stir. Then add the pork and chicken in handfuls. Add ketchup and stir constantly until done. Pork broth can be added at any point. Add additional ingredients to taste.
Add the kernel corn last and allow 30 minutes to simmer, stirring often to prevent sticking. Let simmer for about 2 hours until done.

Shoney’s Strawberry Pie
1 cup sugar
1 cup water
3 heaping Tbsp. cornstarch
4 Tbsp. strawberry Jell-O
Pint strawberries
Baked pie shell
Cool Whip
Heat sugar and water in boiler on stovetop. Stir in cornstarch until dissolved, then add strawberry Jell-O. Keep stirring until thick and clear. Then let it cool. Meanwhile, cut up strawberries into small pieces and place in a cooked pie shell. After the filling has cooled, pour it over the strawberries and place in refrigerator to cool until firm. Cover with cool whip.

Chocolate Peanut Clusters
2 jars dry roasted peanuts (1 salted and 1 unsalted)
1 bar German Sweet Chocolate
12 oz. pkg. milk chocolate morsels
24 oz. pkg. white almond bark
In a crock-pot, place peanuts in first, then break up chocolate bar and put over peanuts. Add chocolate morsels, and then break up almond bark and place on top.
Put the lid on the crock-pot and cook on low for 2 hours. Stir and mix together all the ingredients.
Drop by spoonfuls onto wax paper for candy to set.

Ramen Cole Slaw
Mix all the below ingredients together for the slaw:
1 bag shredded coleslaw mix with carrots and cabbage
1 bundle of green onions cut into tiny pieces (Will not use the entire bundle.)
2 pkgs. chicken flavored Ramen noodles (Bust noodles up and toast them to a golden brown.)
1 can cashews (use as many as you like)
1 pkg. craisins or raisins (I use about ½ pkg. of craisins.)
Dressing recipe:
½ cup vegetable oil
½ cup sugar
1/3 cup vinegar
Chicken seasoning from noodles pkgs.
Mix the above ingredients, shake and refrigerate. Shake to keep blended until time to serve slaw. Pour dressing over coleslaw and mix together.

Sausage Balls
1 ½ cups Bisquick
1 lb. medium ground sausage
1 pkg. shredded cheese
Mix all ingredients together. Add 1 Tbsp. water if mixture is dry. Roll into ¾ to 1 inch balls.
Cook on nonstick surface at 350 degrees for about 20-25 minutes. Roll balls halfway through cooking to prevent sticking and burning on the bottom.