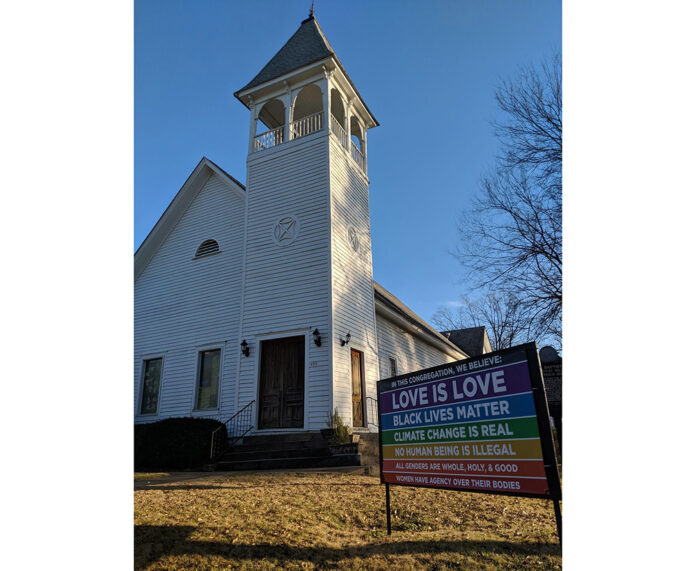 On Jan. 9, members of Auburn Unitarian Universalist Fellowship discovered that the congregation’s social justice banner, which hung outside their sanctuary on Thach Avenue for about two years, was stolen.

The sign included phrases about the fellowship’s anti-racist, pro-choice, pro-science and LGBTQIA+-affirming beliefs. The congregation put the sign up in January 2019 as a witness to the values of Unitarian Universalism.

“We believe that our faith calls us to not only recognize but act on the belief that all people have inherent worth and dignity,” said Rev. Chris Rothbauer, the congregation’s lead minister. “The sign has been a comfort to many who pass by, reminding them there’s a faith community that loves them as they are. To have the sign stolen like this feels like a violation, and many in our congregation are saddened that someone was so upset by a message of love that they choose to take our sign.”

“With the current polarized nature of our world, the theft of our sign is not a surprise,” Rev. Rothbauer added. “It’s still a shock to realize that it happened.”

“Being a part of a fellowship, which affirms and promotes such principles as the inherent worth and dignity of all people and a free and responsible search for truth and meaning, is a source of strength and joy in these uncertain times,” said CJ Marbutt, president of the congregation’s Board of Trustees. “Of course, the loss of a banner is not going to change that, but that banner was a simple way of proclaiming our message right on our very own doorstep: ‘You are important, you are welcome here, and you have a seat at the table.’ Right now, that message seems more important than ever.”

The theft of the sign at the Auburn fellowship is not a unique occurrence. Around the country, dozens of Unitarian Universalists congregations have seen social justice signs similarly stolen, vandalized or defaced by people who disagree with the message. Rev. Rothbauer said the congregation plans to order a new sign, which will be dedicated and erected after new security measures are put in place.

“Though I am angry with what has happened, I want whoever stole our sign to know that we love them, too,” Rev. Rothbauer said. “If I met them, I would let them know that I honor and respect their worth and dignity and will work to build a community where they are loved and supported as well. Our vision is for a world where everyone, including them, can have what they need to not just survive, but thrive.”

“That’s the ultimate meaning of Beloved Community: we all need one another, and we will not let thoughtless actions destroy our feeling of love for the community of Auburn,” Rev.