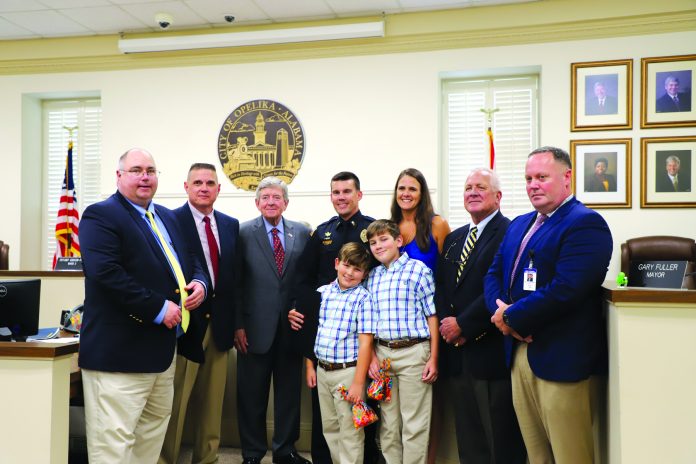 During last week’s Opelika City Council meeting, the council voted to approved a series of change orders regarding the work being done on the new Opelika Police Department and Municipal Court building in order to modify the courtroom for use as a meeting place for the city council and the planning commission.
The changes total nearly $400,000 and are broken down as listed below:
• Seay, Seay & Litchfield contract – $21,500.44
• Robins & Morton contract – $28,531.74
• Freeman & Associates contract – $107, 904
• Contractor Steel Supply Company, Inc. contract – $8,274
• Bradley Plumbing & Heating, Inc. contract – $7,448.03
• Auburn Electric Company, Inc. contract – $225,043
Also during the meeting, Mayor Gary Fuller and the council members recongized and honored Opelika Police Lt. Ben Blackburn for his completion of training with the FBI in Quantico, Virginia.
“We couldn’t be more proud of him and his family. It is a tremendous sacrifice for him to be away from them for ten weeks,” Opelika Police Chief John McEachern said. “It is a lot of classroom and physical training. We knew when we sent Ben up there that he would represent us well. We couldn’t be more proud.”
The council also presented gifts to the 2019 Opelika Middle School Quiz Bowl Team, recognizing their recent national championship win in Orlando.
In other business, the council: