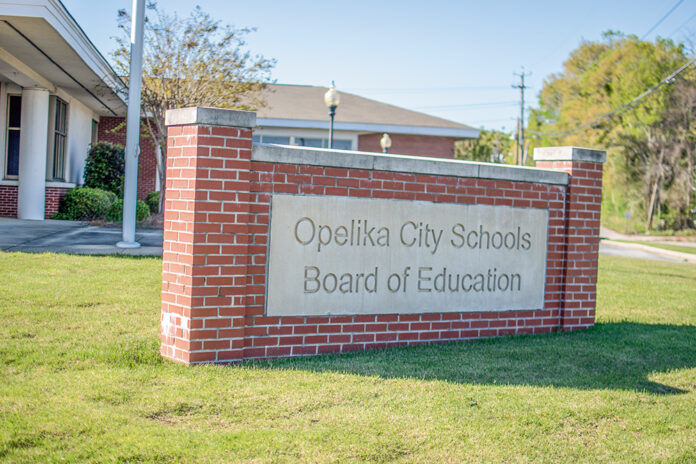 The Opelika City School Board met for its regularly scheduled board meeting last Tuesday and discussed early-stage plans to build a new elementary school in the city.

“We don’t really have a timeline yet, but it’s on the fastrack,” said Opelika City Schools Superintendent Mark Neighbors. “We’re meeting this week to look at a timeline of how feasible it is. This will be a new school, and we aren’t talking about grade levels and all that yet until we finalize it with the board and talk to our teachers, too.”

Following a brief discussion, the board approved a contract with TURNERBASTON Architects, P.C., to design the school. TURNERBASTON attended last month’s Feb. 9 board meeting to discuss how the design firm could work with school system.

The contract has a tentative budget of $12 million and the scheduled end date of the project is still to be determined.

Neighbors said the decision to build the new school was based off the growing enrollment numbers in Opelika’s three primary schools. Those numbers are the highest they have been in the last 30 years, he said.

In other business the board:

heard the presentation of an audit report from Himmel Wright, Hughley Boles, LLC., for the fiscal year ending in Sept. 30, 2020.

approved a memorandum from Assistant Superintendent of Administration, Kenneth Burton, requesting to add buss 05-2 to the list for surplus sale due to a bad engine cylinder.

approved a bid for equipment for the Child Nutrition Program for Morris Avenue Intermediate, Carver Primary, Jeter Primary and Opelika Middle in the amount of $66,177.09.

approved the addition of a non-degree salary schedule for the Federal Program Specialist.

approved a HVAC bid from Bradley Plumbing & Heating Inc. for Jeter Primary School HVAC renovation in the amount of $913,350.

considered an information item regarding adoption of new math textbooks for K-12. A vote for approval will be taken at the next meeting.

discussed the monthly financial report for January and February, both of which have been reconciled.

discussed the monthly Child Nutrition Report for January and February

scheduled a whole board training for Tuesday, April 20.

The final remarks of the meeting centered around the impending end to the statewide health order and the upcoming plans for graduation.

Neighbors spoke on the health order, which is scheduled to end the statewide mask mandate on April 9, and how that may affect Opelika schools.

“We’re hoping to have a more normal graduation, depending on the occupancy and things with the health order,” Neighbord said. “This is one of the smallest groups we’ve had and it’s kind of unusual graduation wise. So, we feel like we can potentially have an old-fashioned graduation with some modifications, obviously. It is our goal to do that, but it’s not in stone.”

The Opelika City School Board usually meets o the fourth Tuesday of every month. The next meeting is scheduled for Tuesday, April 27, at 4:30 p.m. in OCS’s central office (300 Simmons St.).