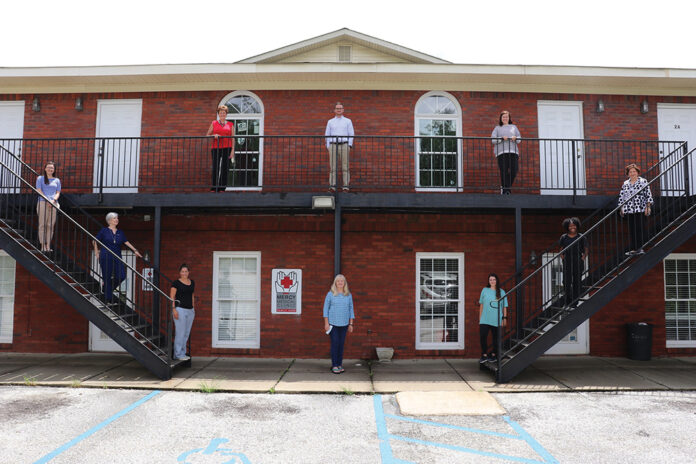 Dr. Dell Crosby has been in a wheelchair for 12 weeks. He has been doing pull-ups on a modified porch swing, exercising his legs any way he can (which amounts to small movements in bed with ankle weights on), praying and keeping up on his administrative tasks with Mercy Medical Clinic.

The injuries that have limited his activities for the past three months are the result of a home improvement-related injury, to downplay it a bit. Crosby was clearing space for a driveway at his new home by cutting down trees when one didn’t fall exactly as he had planned.

“This is about the 100th tree I’ve ever cut,” Crosby said. “It started falling straight toward the house, and I just lost my brain and reacted.” His reaction was to put his hands up against a trunk as thick as his torso to try to protect the house. Luckily, in terms of damage to the house, the tree only broke a few windows. Unluckily, in terms of damage to Crosby, the tree severely fractured his leg, made a mess of the bones in his ankle and came to rest across his midsection.

“The next thing I knew, the tree, the trunk of the tree, was laying on my belly,” Crosby said.

His wife heard the tree scrape the side of the house and went outside to find her husband pinned down. She called 911 then used a piece of wood as a lever to relieve some of the tree’s pressure on his body. When the paramedics got there, they picked up Crosby’s chainsaw to cut the tree, but it didn’t start.

Fortunately, one of them had a chainsaw in his truck. Two cuts later, twelve paramedics were able to lift the section of tree off of Crosby and a thirteenth pulled him out from beneath it.

Last Wednesday (Oct. 7) was the first day that Crosby had been cleared by his doctor to let the now-fused ankle bear weight. He took his first steps in weeks at physical therapy that morning. Soon enough, he’ll be back to doing more than just the necessary administrative tasks for what he called his heartbeat.

Crosby founded Mercy Medical Clinic in 2000, after he had a realization following one of his somewhat-regular trips to Africa. “I was in the church van going back to Auburn, and I started having these thoughts,” Crosby said. “I think God was putting these thoughts in my head: ‘Here I’m willing to pay three, four thousand dollars to go 10,000 miles away and give medical care and encourage people in a relationship with God and love doing it, but is there a need in Auburn?’”

As an emergency room doctor with EAMC, Crosby knew the answer. He saw every day the population that would benefit from such a service in Lee County. That service, is, according to Crosby, “a faith-based ministry business medical clinic. It is a medical clinic for people who cannot afford medical care and have no insurance.”

The clinic, located at 1702 Catherine Court in Auburn, originally provided its services for free but began charging $5 per visit. It now charges $35, which pays about a fifth of its expenses. Crosby said that they charge so that people can have a part in what the clinic is doing instead of being demanding or feeling like they’re just getting charity.

What separates Mercy Medical Clinic from any urgent care or ER is the attention paid to spiritual and emotional healing. Once a bone is set or blood is drawn, a patient might be asked about the status of his relationship with God instead of how he plans to pay for his visit.

Crosby emphasized that he gets to know his patients before beginning any spiritual conversation. “I would gauge it based on your church experience, your intelligence, your interest,” Crosby said, “And if you weren’t interested, I would still ask if I could pray for you. I would pray for me during that, too.”

He added that he always tries to make a patient’s visit to Mercy Medical Clinic a positive one. He’s had atheists come in and tell him they’re not interested in hearing about God, and he still enjoys treating them without pushing that conversation any further.

Most of the clinic’s staff are volunteers; it has nine paid employees and about 100 volunteers a month. It operates almost completely on donations. “The community really has responded; amazingly enough, over the 20 years we’ve been doing this, there are months that we’ve come down to exactly what we needed, then a check will come in,” Crosby said.

To donate or find out more about Mercy Medical Clinic, visit its website (www.mercymedicalauburn.org).