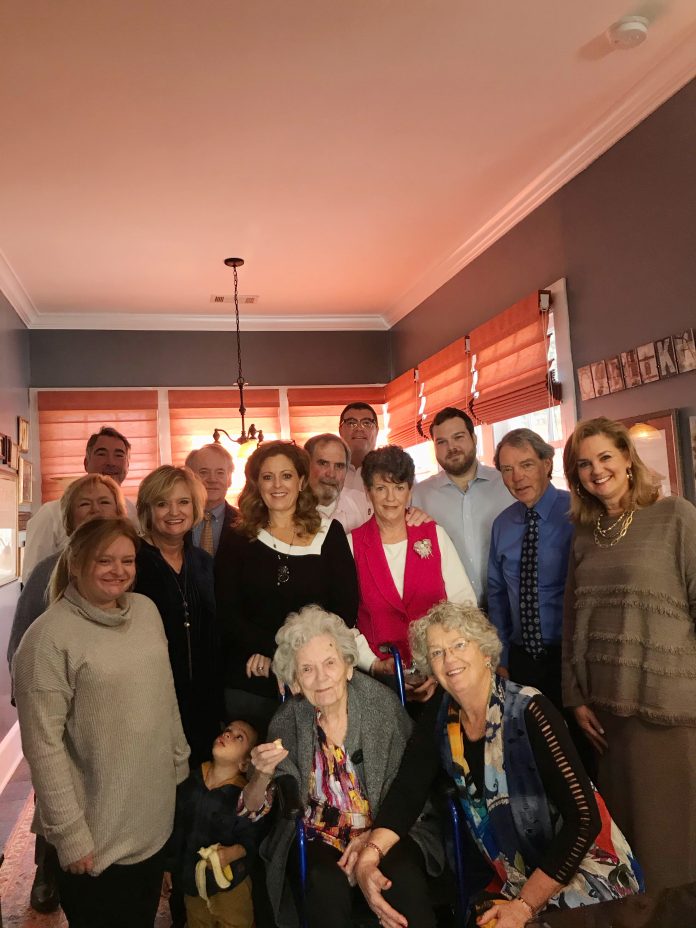 The daughter of a former Lee County sheriff, Margaret Linch Melson was raised in Opelika and attended Southside Elementary, Cliff High and Auburn University, where she majored in home economics. Margaret met John Melson from Huntsville, and they married on March 1, 1939, after eloping to Tuskegee. The two celebrated 70 years of marriage on the same day that John celebrated his 90th birthday in 2009.
Margaret and John have three children, five grandchildren, eight great grandchildren and one great-great grandchild. The Melson family has lived in their home within Opelika’s Historic District for three generations, and Margaret currently resides at Camellia Place.
According to Margaret’s family, she is an “excellent cook, seamstress, flower arranger and homemaker.” Margaret was a school dietitian and later worked at Lee County Hospital. She served as church hostess for the First Baptist Church of Opelika for several years and volunteered there teaching conversational English.
The family celebrated Margaret’s birthday with an intimate lunch and momentous celebration in their home in Opelika on Feb. 9. Pictured in the photo from left to right are: Margaret (center), daughter Sally Phillips and husband Joel, Lele Melson and husband Robert, granddaughter Margaret Moore and husband Lee with his son Raymond Moore, Kathryn Tortorici and husband Sam, granddaughter Beth Phillips Rogers, great granddaughter Katy Beaton and son Ty, along with cousin Kelly Linch and wife Carol.
Opelika city officials and Mayor Gary Fuller recognized Margaret’s birthday by proclamation, which named Feb. 17 as “Margaret Linch Melson Day” in the city.