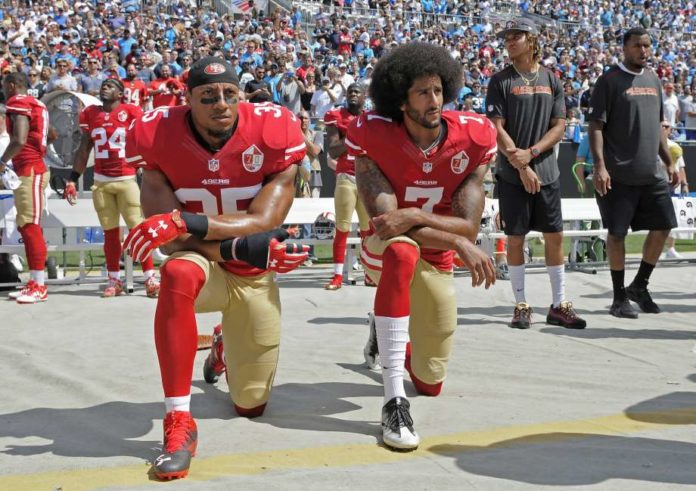 Dear Editor,
Early last fall I read a commentary by Alan West, a Black Republican, on “The Daily Wire.” a conservative news and opinion website. The article gave West’s opinion (an extremely negative one) of Colin Kaepernick, NFL San Francisco Forty-Niners quarterback, and his decision to silently and peacefully protest what he (Kaepernick) perceived to be an injustice to African-Americans. Little did I realize this would still be a headline going into the next National Football League season almost a year later.
I don’t think that Mr. Kaepernick expressed himself in the most effective way, but he certainly had the right to do so. The NFL probably handled the whole situation the right way. If they had tried to stop it, it would just have made it worse.The media is the real reason that Mr. Kaepernick’s protest gained and maintained momentum because they kept making it a news item.
I don’t know what others think, but I fought for and had friends who paid the ultimate sacrifice for the flag that protects the rights of both Mr. West and Mr. Kaepernick.
Mr. West, as a Black Republican, only represents the opinion of a very small percentage of African-Americans.
However he does have the right to that opinion.
On the other hand, Mr. Kaepernick equally has the right to peaceful protest; regardless of the popularity of the stance he takes. If he just mouthed the words “African-Americans are being disproportionately mistreated by the police,” it would have been forgotten as soon as he closed his mouth.
To say, as Mr. West did, that Mr. Kaepernick is a terrorist just because his lover is Islamic is absurd, and the allegation that he is being “radicalized” is baseless and highly inflammatory. This is like saying every White American is a terrorist because Timothy McVeigh and Terry Nichols blew up the federal building in Oklahoma City or the Randy Weaver family and Kevin Harris incident at Ruby Ridge, Idaho.
Anyone who thinks this is not an issue that needs to be brought to the forefront needs to pull his or her head out of fantasy land and breathe the air of reality. Think about the likelihood of a Black male being shot by police versus the likelihood of a White male being shot by police. This is not a new phenomenon, but, with the advances in communications technology, everything is instantly available and we see things that we would not have seen in the past. I was as pleased by the immediate and positive vocal stance by the law enforcement community against police brutality as I was troubled by the president’s use of his platform to encourage police to “rough up” suspects.
There is a saying in the military: “A slice of cake has the same ingredients as the whole cake,” meaning that, no matter the profession, there is a minute percentage of bad apples. Whether politicians, preachers, teachers, doctors, lawyers or police, all have a few bad apples. As in society as a whole, the vast majority of people in those professions are outstanding people. And, in orderly society, the bad apples are generally held accountable for their actions. When we take off the blinders of our own personal experiences, it is not so difficult to imagine how those in different circumstances may feel.
It is very hard for me to judge or categorize any individual or link them to a particular group. Whether wrong is perpetrated by an African-American man or a police officer, I do not assume that all African-American men or all police officers are bad. Instead, I think that person who perpetrated the wrong is bad. To think any other way is unfathomable to me and endangers the very fabric of the country which Mr. Kaepernick is being accused of so woefully disrespecting. It is truly unfortunate that this man’s ability to earn a living is now being taken away because he chose to take a stand by simply kneeling, All Amaricans should feel outraged that it is no longer acceptable to have an opinion in the workplace that is different from the majority, even if that opinion in no way impacts the ability to do one’s job and do it well.
It is unfortunate that Mr. West and those who think like him use forums such as this to imply that persons who are in positions of privilege, power or influence should not speak out against wrongs (either actual or perceived) that they have observed. It is evidenced throughout this country’s history that real change happens only when the powerful and the powerless, those on the margins of society and those who enjoy its privileges, stand together. Instead of focusing on the symptoms of the problems in our society, the leaders of our nation, our cities, our families and our houses of worship need to get serious about addressing the root causes. Until this happens, it is only reasonable to expect that those who feel disenfranchised, voiceless or underrepresented will continue to find ways to make their voices heard.
Larry Gray
Opelika
Former Opelika city councilman, Ward 2