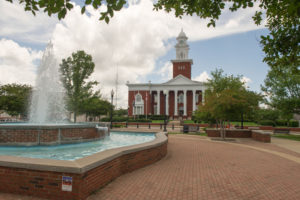 The Lee County Commission voted to approve a Warrant Purchase Agreement for a 2018 Series Bond issue between the county and Frazier Lanier Company Incorporated. Four projects have been consolidated into one financing plan the total of which is approximately $9.14 million. The projects include:
– the construction of a total of eight recreation ballfields and support infrastructure among the Beauregard, Beulah and Smiths Stations area parks – projected cost of $5 million
– plans to finish a large multi-purpose courtroom and judge’s suite at the T.K. David Justice Center – projected cost of $2.3 million
– complete the expansion of the downtown Opelika courthouse with an $850,000 renovation to the existing structure
– expansion of the emergency management operations center to add modern office space – projected cost of $1.8 million
The warrant issue funding would cover $9.14 million and the remaining $995,000 would come from existing county funds. According to Bob Young of the Frazier Lanier Company, this purchase agreement would lock in interest rates until the commission’s next meeting where a warrant resolution would be then voted on.
In other business, the commission:
• voted to approve the minutes of the commission meeting held Nov. 14
• voted to ratify and approve Claims
• heard the first reading vacancy on Lee County Department of Human Resources Board – Opelika resident Vicki Hudson has submitted a citizen’s interest form for this position
• heard the second reading and voted to approved Waverly resident Bob Harris to fill the vacancy on the Mid-South RC&D Council
• approved a request by Commissioner Robert Ham for the Lee County Kiwanis Club to use the Meeting Center in order to stage the annual Christmas food and toy give away
• approved a salary variance for Sheriff’s office position as presented by Sheriff Jones
• approved the request by Alabama Department of Transportation (ALDOT) for the commission to supply a letter of support for the Competitive Highway Bridge Bundling grant which includes a project for I-85 Exit 60 bridge replacement. This would include the replacement of I-85 bridges NB/SB at Exit 60 in Lee County to include Long Street, Railroad and State Highway 51.
Furthermore, the new bridges would be built to accomodate three lanes of traffic should that be applicable in the future.
• approved the request by the highway department to authorize the chairman to execute the Federal Aid Agreement for Bridge Replacement on Lee Road 249 over Soap Creek – the projected cost of this bridge replacement is $1,162,501.50.
• approved a bid for a bridge replacement project on Lee Road 65 to Newell and Bush, Inc. in the amount of $1,086,009.79. This project will begin on Feb. 11, 2019 and is expected to take 9-12 months to complete.
• approved a bid for tied concrete block erosion control mat from Grogreen Solutions for purchases that are less than 2400 sq. ft of material and approved a bid from Premier Concrete Products for purchases that are for more than 2400 sq. ft. of materials. • approved a bid for cement mortar flowable backfill from Sherman Industries, LLC
The Lee County Commission meets the second and last Monday nights of every month at 5 p.m. Meetings are held at the Lee County Courthouse which is located at 215 S. 9th St in downtown Opelika.
The next meeting will be on Dec. 10.