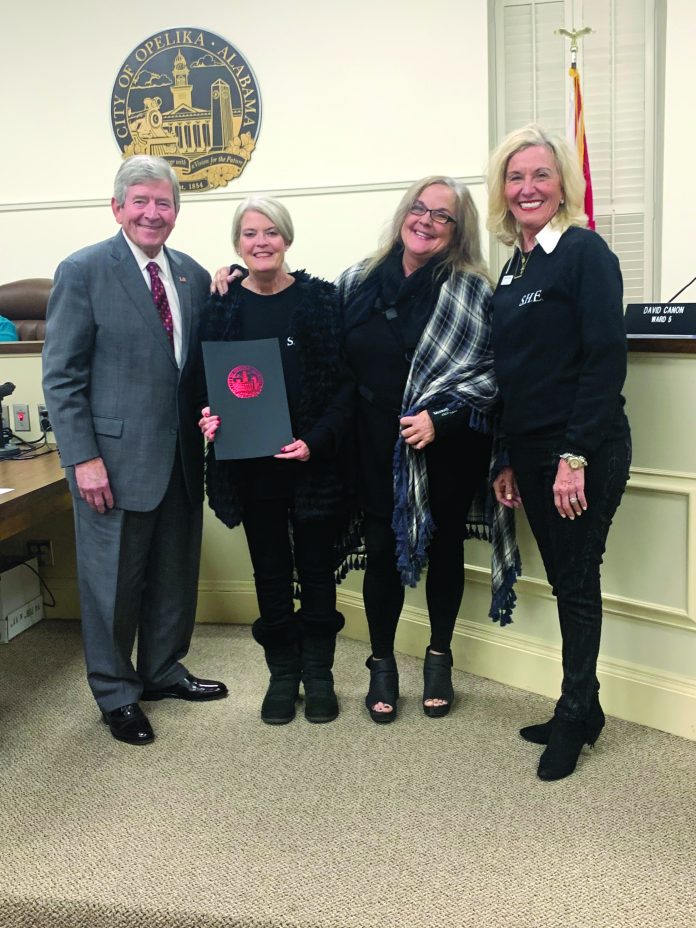 All municipalities within Lee County have adopted resolutions naming January as “Human Trafficking Awareness Month” thanks to statewide efforts by the Alabama Human Trafficking Task Force to address this growing issue.
Research provided by the organization shows that I-20 which runs between Atlanta and Birmingham as the most active route for sex traffickers in the United States, thus earning it the nickname the “Sex Trafficking Superhighway.” The U.S. Institute Against Human Trafficking reported that $110 million was generated last year by the commercial sex industry in Birmingham alone.
As I-20’s reputation grows, statistics and evidence show that sex traffickers are altering their routes, taking them right through Lee and Chambers counties and placing local children and adults in their path.
A local group of seven women have come together to form a nonprofit organization called “Stop Human Exploitation” (S.H.E.) to combat the problem with a goal of completely eradicating human trafficking from East Alabama.
‘An answered prayer’
Kathryn Guthrie, a spokesperson for the group, said the idea for S.H.E. came after crossing paths with longtime friend Dr. Veronica Chesnut at a conference at the Auburn Church of the Higlands campus in 2018.
“I serve as the Alabama team leader for REDEEM, which is the anti-sex trafficking ministry that is part Take the City in Columbus,” Guthrie said. “I’ve known (Chesnut) for 20 years or more and when we ran into each other and I told her what I was doing, she told me that it was an answered prayer.”
They, along with fellow core members Pam Brinson and Leigh Hardy, came together to form the nonprofit last summer.
‘It’s everywhere’
Politifact.com lists human trafficking as the No. 3 crime globally, and Guthrie said predators lack no means of luring and exploiting others in this technologically driven age.
S.H.E. members encourage parents or guardians to carefully monitor all their children’s phone activity. Apps like Snapchat and Tiktok and social media platforms are both prime avenues where predators lurk.
Adults, particularly women, should exercise caution on dating sites and posting updates on social media. For dates or social outings, they should consider adopting a “buddy system,” keep a vigilant eye on their beverages and food and always be mindful of their surroundings.
“It’s almost like people don’t want to believe or have shame that trafficking is taking place here in our area, but it’s happening everywhere,” Guthrie said. “Just look at the recent cases in Alabama involving ‘Cupcake’ McKinney, Paighton Houston and Aniah Blanchard … Aniah’s case was right on our back doorstep.”
Addressing the issue
The group has already held several events to raise awareness in the Auburn-Opelika area, including seminars in October and November with Teresa Collier and Katherine Stewart ALEA week at Greater Peace Baptist Church led by Teresa Collier who is an intelligence analyst with the Alabama Law Enforcement Agency.
Guthrie said that they are in conversations with Opelika Mayor Gary Fuller and Opelika Police Chief John McEachern to partner with state task forces in the fight against commercial sexual exploitation and trafficking.
“The Opelika Police Department, as well as the Auburn Police Department and Lee County Sheriff’s Department, will continue to address the issues of sex and human Trafficking in the Lee County area. This will be done in concert with ALEA officials and the Alabama Fusion Center,” McEachern said in a statement. “Officers will receive training in how to identify signs of potential trafficking and what to look out for. Training classes for such have been provided in the past with more to follow. Ultimately, the goal is to rid such activity in Opelika and Lee County entirely.”
Redeem, S.H.E.’s arm of outreach, will also go to where known local trafficking is taking place and engage with the buyers and women involved, whom they provide with information and resources on how to escape the vicious cycle where many find themselves.
One of the group’s next phases is to push for speaking engagements at local churches, schools and civic organizations. Chesnut emphasized that talks can be tailored to the audience’s needs.
“I got a call from someone in Muscogee County the other day, which is great. We may focus on Lee and Chambers (counties) but we are willing to go anywhere to help inform and educate people,” Chesnut said.
In the future, they are looking to open a safe house similar to one operated by Chattahooche Valley Ministries in Columbus and help lobby for Alabama lawmakers to pass legislation mandating human exploitation training for educators.
The group is actively seeking volunteers to help flesh out S.H.E.’s purpose and efforts moving forward. Following is contact information for those who need more information or want to inquire about volunteer opportunities: 334-707-4096 (Brinson); 334-202-9562 (Chesnut); 334-319-1183 (Guthrie); 334-704-4451 (Hardy) and 404-597-7306 (Debbie Morris).

Opelika Middle School students with special needs to perform at AMEA Conference in Montgomery on Jan. 16