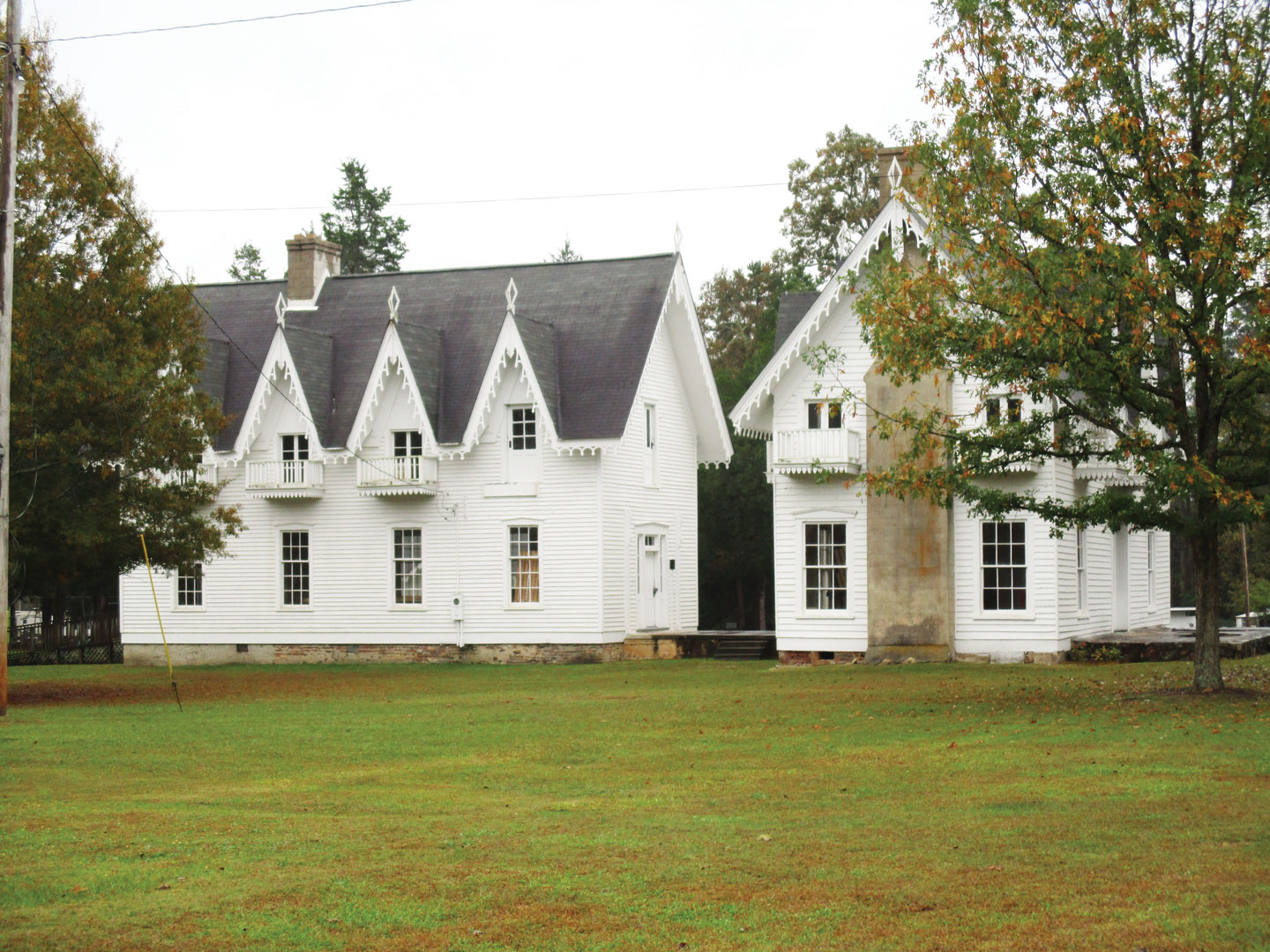 Hankering for a little horror this Halloween? As legends have it, Opelika is home to a handful of spooky ghouls and things that go bump in the night. Faith Serafin, director of the Alabama Paranormal Research Team and author of “Haunted Auburn and Opelika,” discussed some of the city’s most well-known apparitions.
Spring Villa, a lovely place for a day out with the family, has been the subject of Opelika ghost stories for years. Built in 1850 by Horace King for plantation owner Penn Yonge, the Spring Villa mansion is rumored to have been the site of a brutal murder. As the story goes, there had been some mistreatment of Yonge’s slaves, and one slave sought revenge by hiding in a cubby hole cut into the wall along Yonge’s spiral staircase that led to his bedroom. As Yonge proceeded up the stairs to retire for the night, the slave jumped out onto Yonge and decapitated him on the 13th step. The legend is that there is still blood on the step that will not wash away after all of these years. “The Alabama Paranormal Research Team has investigated  the Spring Villa Mansion numerous times. We hold it dear to our hearts because it is our local haunted house,” Serafin said. Reports of paranormal activity on the thirteenth step of the staircase have ranged from feeling “overwhelmingly sick” on the step to actually being pushed from that particular step. “That legend is pretty much only a legend,” Serafin said. “What I’m here to tell you is I’ve heard that story and variations of it for years, and I have been in that house numerous times and never seen a blood stain or anything you would associate with the legend.” However, Serafin added that there are a few other hauntings at Spring Villa. There have been many reports of a young boy about 5-8 years old roaming the grounds and looking out the mansion windows. “The boy is blonde and always seen in period kind of clothing with darker colored overalls and a white shirt underneath. He is typically barefoot,” she said. “ We don’t know where he comes from, but we are not the only ones who have seen him.” Serafin said the caretakers of the grounds have seen him as well and that her team has obtained video footage of the ghost.
Serafin also told the story of a camp counselor who took a group out to the house for a camping trip back in the 80s. The group had to leave because of a power outage, and the counselor went back in the house to make sure no one had forgotten anything. “When others went in to check on him after he didn’t return for a while, he was found sitting on the floor, pale-faced and crying. He was scared to death of what he had just witnessed,” she said. “The counselor later reported that he had seen and heard a man playing the piano inside the building. At the time, there was no piano in the house, nor was anyone else supposed to be in the house.” (Serafin’s) team reportedly has recordings of piano notes in the house.
Another ghost many have reported seeing is the “Blue Lady” who resides in a South Railroad Avenue loft. The root of this legend goes all the way back to the Civil War when a local girl named Charlotte fell in love with a young man who was sent off to war. “It’s a tragic love story,” (Serafin) said. After Charlotte did not hear from him for a long period of time, she presumed he was dead. After losing her family to sickness and disease, she began working at a brothel that was next to a hospital (now the Irish Bred Pub).  When a train stopped in front of the hospital one day and her true love was delivered suffering from serious battle injuries, she began taking care of him in her room at the brothel. The young man was not able to pull through, and shortly after his death, Charlotte committed suicide by flinging herself off the balcony of the brothel. Today, she has the name of “Blue Lady” because she can be seen outside the building at night, wearing a blue dress with matching hair ribbons, walking arm-in-arm with a Confederate soldier.
Got chills yet? If not, visit the site of a former WWII P.O.W. camp, now the area where the John Herbert Orr Industrial Park is located. The ghost associated with this site is described as an “angry, sinister spirit.”  According to the legend, one of the Nazi soldiers held prisoner at the camp stole from and murdered other inmates. He was convicted and executed on site. “They say that the body of this angry German soldier that was buried there was never properly exhumed and sent back to his family in Germany,” Serafin said. “Today, people say he appears in a Nazi uniform and has eyes that glow and burst into flames. He’s almost always nasty.” Serafin said that this ghost specifically targets women. She told the story of a woman formerly employed by Ampex who spotted the spirt while leaving work. “A man in a hospital gown with his head all wrapped up approached her and asked for some cigarettes. When she reached into her purse for them, the man had vanished,” she said. “The old infirmary, where the sick soldiers were kept, is still standing today. It’s right there behind where Ampex used to be.”
We may never know if these legends are myth or fact, but as Halloween approaches, keep your eyes open for the presence of these characters who have gained so much notoriety in “Haunted Opelika.”