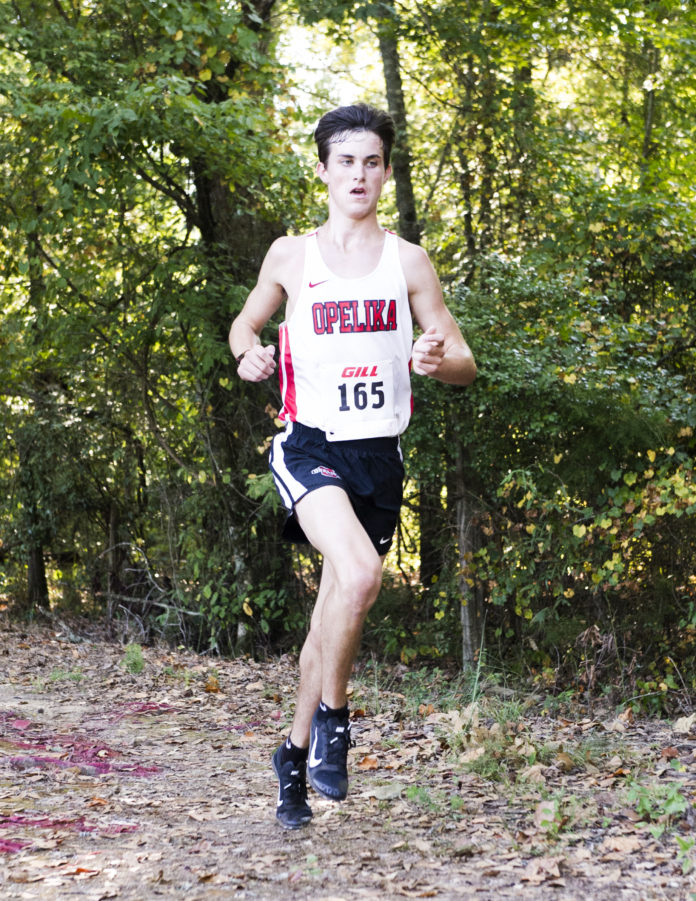 Opelika High senior Ben Garner won the sixth annual Opelika Cross Country Invitational, sponsored by the Opelika All-Sports Booster Club, with a time of 16:30. The cross country course is located at the Opelika Sportsplex.
The OHS girls and boys both finished second behind rival AHS. The Tigers won both varsity races.
The OHS girls were led by Savannah Karl’s 11th place finish, with a time of 23:10.04. Nikere Durr (24:16) was 15th, and Shakerra Forbes placed 21st .
Braden Holloway ran a 18:16.66 to finish eighth for the boys, Marcus Chandler was 11th and freshman  Tykell Jones placed 21st.
The OMS girls and boys also participated in the meet. The girls were led by Abby Noon’s 14th place finish. Lydia Hodges (18th) , Kalaya Dutch (24th) and Jamiya Jones (25th) also placed.
Garrett Fitzwater led the OMS boys with a tenth place finish with a time of 12:58. Will Fuller (15th), Ryan Johnston (18th), Mitch McCullough (21st) and Evan Goodman (22nd) also ran.
The varsity teams run a 5K course while the middle schools run a 3K course.
The OHS cross country teams travel to Birmingham for the Spain Park Cross Country Invitational meet this weekend.
OPELIKA 4-0
AFTER WIN OVER CHILTON COUNTY
The OHS Bulldog football team improved to 4-0 and 1-0 in Region play after shutting out Chilton County 42-0.
Opelika started slow, only taking a 14-0 lead in the locker room at halftime. However, the Dawgs scored two quick third quarter touchdowns to increase the lead to 28-0 with 10:35 left in the third quarter.
Weldrin Ford scored three TD’s with runs of 2, 22 and 3 yards; Jaleel Heard caught an 18-yard touchdown pass from John David Worth; Melvin Billingsley caught a 11 yard pass from Cade Blackmon and Jamies Presley returned a interception 30 yards for a score.
Austen Blackmon added 5 PAT’s and Tyler Sellers kicked the final PAT.
OPELIKA v. BRHS
Opelika hosts Benjamin Russell High School of Alexander City Friday at 7 p.m. in a huge Region game at Bulldog Stadium. The Wildcats are 2-1, 2-0 in the Region.
BRHS defeated Pelham 42-21 and 40-29 after losing their opener 19-16 to Central of Clay County. Head Coach Danny Horn will bring a talented and disciplined team with a chance to win. The Wildcats lead the historical series 36-31-3.
In recent years, Opelika has beaten Benjamin Russell 8 out of the last ten games, including three straight.
The Bulldogs are a balanced team, averaging 179 passing yards and 198 rushing yards. They are scoring 40 points a game and giving up only 8.75 points. Ben Russell will bring a run-oriented team to Bulldog Stadium Friday night. They will line up in the wishbone at times. This offense can be effective and run clock if we allow them to pick up first downs. Our defense must stop the inside run to be effective..
The Dawgs were penalized eight times for false starts or lining up in the neutral zone last week. Foolish penalties have been a issue in each game so far.
I look for Opelika to win a close game. We are playing at home and have a better defense. OHS must play its best game and not commit stupid penalties and not turn the ball over in order to win the game.
Tickets can be purchased at Victory Design and Bubba’s Medicine Shop for $7.00 until noon Friday. The Ticket Office at Bulldog Stadium will open at 5:30 Friday afternoon.
LISTEN TO OHS v. BENJAMIN RUSSELL
Opelika fans can listen to Opelika/Benjamin Russell Friday night starting at 6:30 with the Brian Blackmon pre-game show. Former Opelika Coach Larry Gore and former OHS quarterback Jeff Sasser will provide commentary while I handle the play-by-play.
You can tune in to 97.7 KICKER FM or online at kickerfm.com or download the i-Heart Radio App on your smart phone. Search WKKR.
VOLLEYBALL
The OHS volleyball team improved to 4-5 with wins over Beauregard (3-0)  and Calloway (2-1).
The girls hosted Wetumpka Tuesday night. The results were not available at press time .OHS will host Shaw September 21 at 5 p.m.
D.Mark Mitchell is sports director for iHeart Media, Alabama Dixie Boys State director and vice president of the  A-O Sports Council.