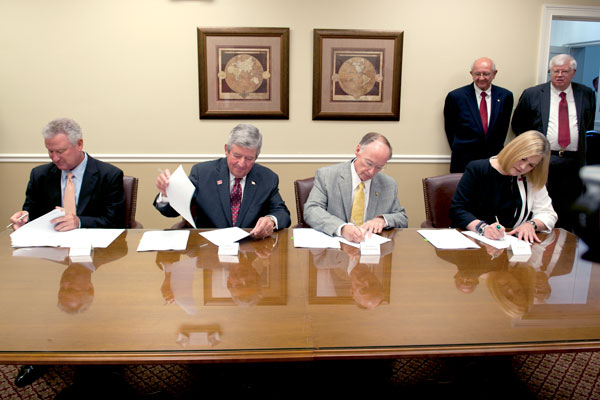 “This is significant,” said Bentley. “We have 200 new jobs for people of this area – good high-paying jobs.”

Mayor Gary Fuller, speaking to the packed house at city hall, recognized the commitment, noting “another great day in the life of our community.” Fuller and the city council members were presented with project plans at the Tuesday night council meeting. The council approved the plans unanimously, agreeing to provide financial incentives, waive permit fees and add a new traffic signal in the area.

According to a release provided by Baxter officials, hiring will begin in 2016.

“We have the best workforce training of any state in the country,” Bentley said. “Gambro and Baxter recognize this … (Alabama) is just a great place to do business.”

According to Baxter’s release, “Baxter’s expansion in Opelika will provide increased production of dialyzers, which are a critical component to the delivery of hemodialysis, a life-sustaining therapy for patients with end-stage renal disease.”

Secretary of the Alabama Department of Commerce Greg Canfield thanked several of the state-level and local-level players who were part of both bringing Gambro to the area originally and making the new expansion possible, praising the teamwork that took place.

“Great companies make great success stories,” Canfield said. “We look forward to that continued success … We all come together as a team to create a really bright future.”