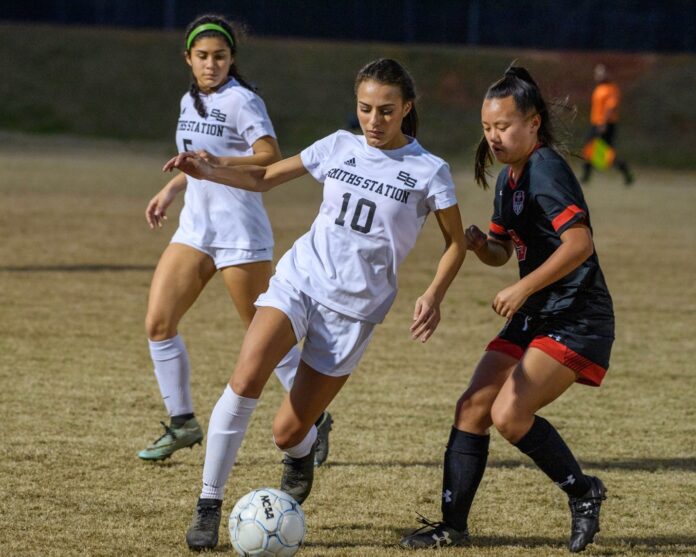 The Smiths Station Girls soccer team has big goals for the season, and their experienced defense and determination are going to get them there.

“I’ve been impressed with their determination and willingness not to give up,” head coach Dennis Jones said.

While their mental fortitude has stood out to Jones, the defense has stepped up in the early part of the season, turning in four clean sheets in their first seven games.

“I’ve got three seniors and a junior as my starting back four defenders,” Jones said. “They’re seasoned, and they are veterans who have been playing together for a long time, they are just solid. They play very well together.”

The group is led by their starting center backs Sarah Bruce and Alana Tapia, who Jones believe do a great job covering for each other and leading the defense. Making the defense all the more impressive is a lack of starting goalkeeper, the job is still an open competition between senior Katie Haws and eighth graders Charlee McDonald and Savannah Harlan.

The defense and mental strength have carried them to a 4-1-2 record.

It took until the third game of the season for the Lady Panthers to allow their first goals of the season in a 3-1 loss to Montgomery Academy.

“I give Montgomery Academy credit; they had an all-around effort from their team,” Jones said of the loss. “They were very fast, very quick to the ball and very aggressive.”

Jones admitted his team had a chance at a 1-1 tie but some mistake by the goalie allowed two easy goals that put the game out of reach.

“The girls never got down, never hung their heads and never thought that they were beat,” Jones said. “They kept on going and finally pulled off the tie, it made it feel like a win.”

Despite allowing four goals, Jones was not disappointed in his defense, admitting that it was more about the speed and athletic ability of Amiya Brown who scored all four goals for Opelika than a team effort or mistakes on their own part.

Despite coming away with a draw, Jones was pleased with the result and believes it helped his team realize what they were capable of.

“They realized what they could do Thursday night after that big comeback. Even though we haven’t trailed in the two games we had Saturday, it took us a while to get on the board, and it was the same theme. Their determination, they just keep grinding and keep going for it they never get feeling where they can’t do something. They know that they can as long as they keep playing as a team and hustling.”

That belief has been turned into results as they responded with back-to-back wins over Albertville and Brookside on Saturday, winning 1-0 and 2-0, respectively. They returned to action Monday against Northside and played them to a 2-2 draw.

The strong defense has been crucial for the Lady Panthers as the offense is still coming together and has cooled off after scoring 10 goals in their first two games. They have scored eight goals in the four games since.

The teams primary goal scorer is senior Kylie Pritchett with Morgan Ritter being “instrumental” as a distributor and getting a lot of assists.

The Lady Panthers will host Central-Phenix City Thursday to open up area play, and Jones is looking for his offence to take a step forward.

“I’m really hoping to be impressive,” Jones said. “I am really wanting to focus on attacking and finishing in the final third. I’m hoping to get the attacking girls more on the same page and being able to finish a little bit better.”