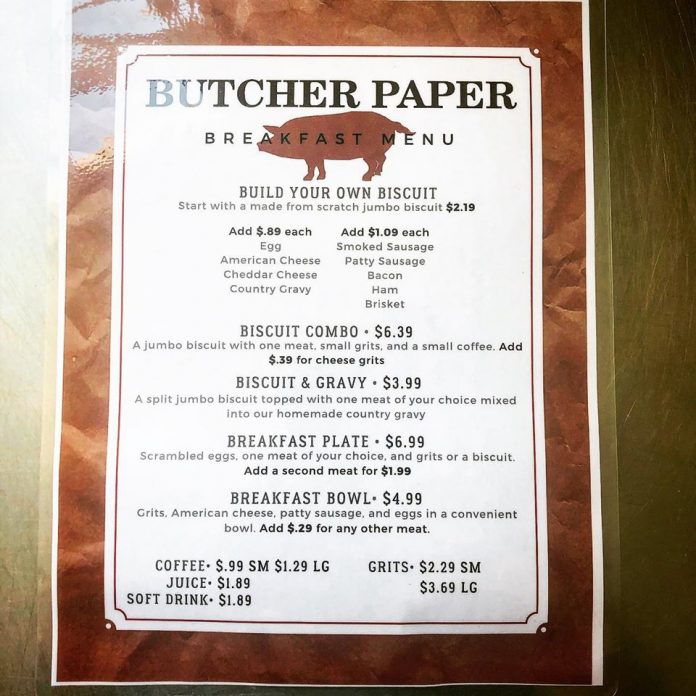 Butcher Paper BBQ opened its storefront restaurant at 128 Columbus Parkway in Opelika in September 2018 after the success of both catering and its food trailer.
“I’ve been wanting to do breakfast ever since I opened the trailer, but it never worked out there were just too many moving parts, so when we opened the restaurant I had the idea of doing breakfast here from the beginning, but it was just baby steps starting with lunch,” said Butcher Paper owner Mark Coxwell.
There were some adjustments made to the building, along with new equipment added in order to be able to serve breakfast.
The soft opening for breakfast was held two weeks ago. This week, breakfast will be served Wednesday through Saturday starting at 6:30 a.m. Beginning on March 23, the restaurant plans to serve breakfast on a regular basis Monday through Saturday starting at 6:30 a.m.
The breakfast menu is “simple, Southern and big,” Coxwell said. Customers can expect “sheet panned biscuits from scratch rolled out and cut into squares so you get as much biscuit as you can possibly get.”
“It’s all homemade and we make it every day, it’s all fresh and it reminds me of Saturday mornings when my mom would cook breakfast,” Coxwell added.
During the soft opening, some of the most popular items included biscuits and gravy, the brisket biscuit and the patty sausage.
“(I) want to thank everybody, everybody has been so great and we have such a great following and our customers are the best. I’m super happy that we can open for breakfast now,” Coxwell said.
For more information, call 334-748-9008 or like and follow the restaurant’s social media pages.