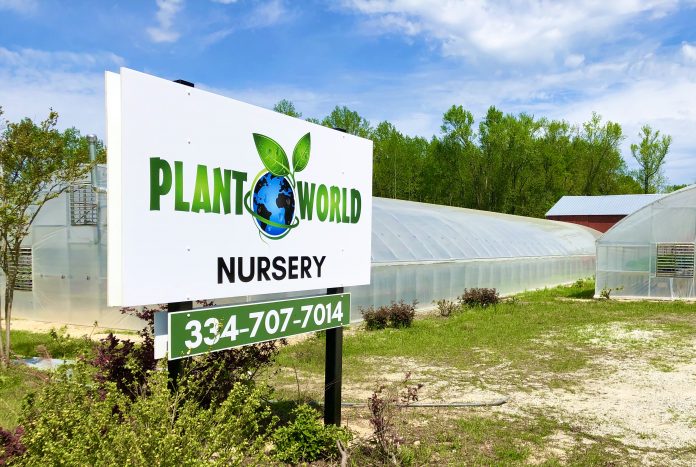 After three years of being closed, Plant World Nursery in Beauregard has officially reopened its doors to the public.
The nursery is now owned and operated by Trace and Cathy Donald, both of whom are Lee County. Trace is the director of Auburn University’s Office of Accessibility and Cathy is a dentist who works at Opelika Dental Arts.
Plant World was opened in 1985 by now-retired Auburn University Professor Dr. Billy Dozier and his wife Cecelia, the business eventually became a Lee County institution known for its wide array of annual and perennial plants, fruit and shade trees, vegetables and more. The business changed hands shortly after Cecelia’s death in 2008, operating under two different operators before permanently closing in 2017.
Reopening the nursery has been a topic of discussion for several years, according to Trace. He and Cathy both worked at the nursery at various points in their life, adding that reopening Plant World was something they “wanted to do” and “would be good for the community.”
Efforts began in earnest last fall to restore the nursery, cleaning its grounds and repairing four of its greenhouses to operational status. Plant World officially reopened for business on March 21.
“We’ve had a lot of old customers come in here and tell us about their memories of this place – Cathy’s parents and former employees who worked here. The (pandemic) has made it harder to operate, but overall, it’s been a real positive experience for us,” Trace said.
“We’ve had people from as far away as Columbus, Valley or Americus come and see us because they saw online that we were open again, which means a lot,” Cathy added.
While COVID-19 guidelines are in place, Trace said customers must closely follow the six-foot social distancing procedure. They are currently offering curbside pickup for customers who would prefer to stay in their vehicles.
“(Unlike) other big stores, people can come in here and talk to us. There’s an opportunity to build a rapport with our customers and we just want to make it a more personal experience for them,” Trace said. “We’re also able to offer some variety that other stores may not be able to provide, which helps give us an advantage.”
Currently, Plant World’s hours of operation 9 a.m. to 5:30 p.m. Tuesday through Friday, 9 a.m. to 5 p.m. on Saturday and 1 to 5 p.m. on Sunday. They are always closed on Monday.
For more information and updates, like and follow their Facebook page “Plant World Nursery in Beauregard, AL.” The nursery is located at 7509 Lee Road 146.