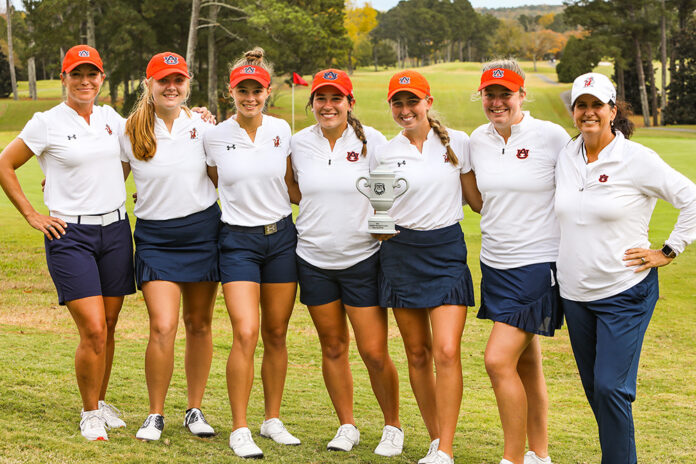 The Tigers, who went into the final round with the lead, found themselves trailing with three holes to play. They were not fazed. Freshmen Elina Sinz and Anna Foster each birdied two of the last three holes, Megan Schofill made a birdie on 17, and the team finished the day one shot ahead of Tennessee to earn the victory.

It is Auburn’s first team title since the Tigers won the Lake Oconee Invitational last spring.

“It’s really special,” junior Mychael O’Berry said. “We knew going into today that it was far from over. But we had some freshmen step up. It was tough conditions today, really windy, so it was cool to see the whole team come together and get the win.”

“It’s so enjoyable to play golf,” head coach Melissa Luellen said. “Once you tee it up, COVID seems to kind of go away. You just get to compete and play golf and do what you love. They got their adrenaline up. They got a little nervous. They got a little tight. They got excited. All the different experiences and emotions, they got to experience that. I’m just really happy for them.”

Schofill’s birdie on 17 helped the returning freshman claim a share of the individual title. She fired a 72 (E) on Sunday and finished at 3-under for the tournament. It’s the second individual win for Schofill who also won the title at the Lake Oconee Invitational last spring.

“It feels really good to get an individual win,” Schofill said. “I played really well all three days. Just kind of focused on my game and what I was doing well, managed my game really well, and played one shot at a time. I never got too far ahead of myself.”

O’Berry also placed in the top five individually after shooting a 72 (E) in Sunday’s third round with a key birdie on No. 14. The junior wrapped up the weekend at 1-under.

After a slow start Sunday, Foster and Sinz combined to shoot 5-under on the back nine. Foster finished with a 72 (E), matching her career-low round from the last tournament. Sinz carded a 74 (+2) in the third round, and at 3-over for the tournament, she placed in a tie for 13th overall. It’s her second straight top-20 finish.

Sophomore Brooke Sansom shot a 76 (+4) on Sunday to finish tied for 45th overall.

“It was 100% a team effort,” Luellen said. “Everybody contributed. I really hope this week keeps everybody on their toes on our team because it is going to be a battle in the spring.”