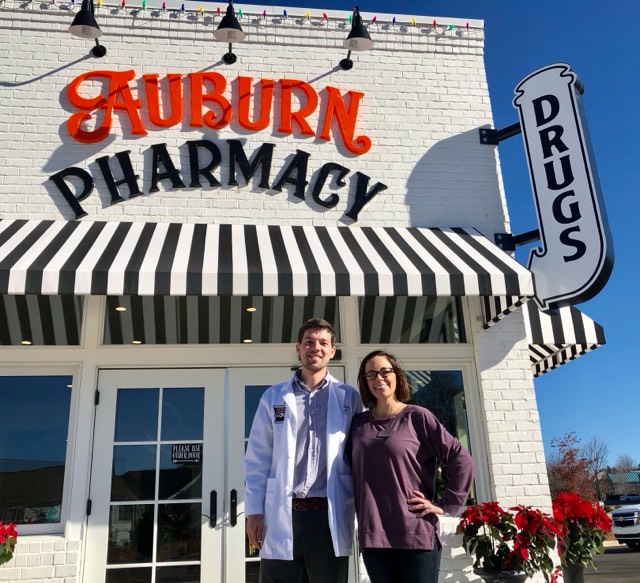 Individuals who visit Auburn Pharmacy can expect a wave of nostalgia to pass through them as they enter its doors.
Located at 643 N. Dean Road, Auburn Pharmacy is designed to look “like the hometown pharmacies you might see in a town square or small downtown” according to owners Chris and Nicole Finley.
“We’ve had so many people walk in and say, ‘oh, this reminds me so much of old pharmacy back home’ and that’s just music to our ears. That’s exactly what we envisioned when we set out to do this a couple of years ago,” Chris said.
Both Chris and Nicole hail from Bainbridge, Georgia, a small city of nearly 13,000 people in the southwestern corner of the Peach State. The couple met through mutual friends in their hometown and wedded in 2014, and are now parents of two young children.
The Finleys have strong ties to the Auburn-Opelika area.
After receiving a degree in mass communications from Auburn University, Nicole returned home and opened her own boutique, which she operated for several years. Chris enrolled in pharmacy school in Auburn in 2014 after completing his undergraduate studies at Valdosta State University.
Finishing pharmacy school last year, Chris announced to his classmates that he was going to open his own indepent pharmacy, a decision met with criticism and doubt.
“There were a lot of people who questioned my decision and my line of thinking … but I relied on God to get me through that and to where He wanted me to be,” Chris said.
Working closely with local realtors, the Finleys managed to secure the lot at a price within their price range and close proximity to a booming medical park. Construction was started last year.
The Finleys were able to host Auburn Pharmacy’s grand-opening festivities on Nov. 20, and were met with a warm reception from the community.
A cornerstone of Auburn Pharmacy’s business model is its approach to customer service.
The Finleys said they work tirelessly to match competitor prices and help customers work through insurance concerns and questions when it comes to prescription costs.
“There’s a common misconception that local pharmacies have higher prices. A lot of times, we can price match or help people realize that we are cheaper than most major retail or chain (pharmacies),” Nicole said. “We encourage people to call us and let us do a test claim and see.”
“When that fact does prove to be true, that difference is normally something (nominal) like 50 cents. And most of the time, people will want to go with us instead,” Chris added.
Nicole oversees the store’s gift shop, which carries the Melissa and Doug toy line and a host of items created by local makers. They will also offer embroidery and vinyl services for their customers.
“We’re trying to reach out to local artists and makers and carry as much of their products as we can. We’re telling them, ‘we want to support you, because we hope in term that you’ll support us too,’” Nicole said.
Chris added that a built-out space in the store will be converted to an old-fashioned soda fountain in the spring that will rely on the same equipment and drink-making processes found in pharmacies decades ago.
Once launched, their website’s domain name will be www.auburn-pharmacy.com. They have an app for customers to use to place orders and more.
Following are some of the other services offered by the pharmacy: