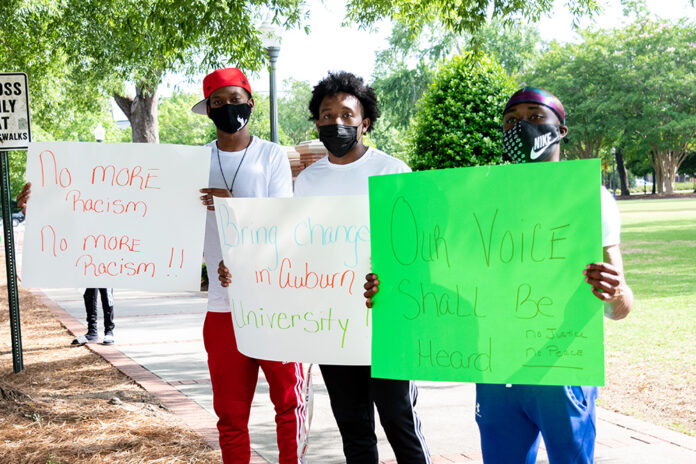 By Abbey Crank
For the Opelika Observer

It was a bright, windy afternoon in downtown Auburn on Friday, May 28. A group of students and concerned citizens brought signs saying “No Justice, No Peace” hoping to make a difference.

Rev. Arthur Dowdell decided enough was enough as he led a protest against systemic racism in front of Samford Hall.

Dowdell explained this was the first protest of many to fight for diversity on Auburn’s campus. He asks everyone to come out to future protests and “make some noise.”

“Auburn University shouldn’t be the whitest university,” Dowdell said. “You’ve got to be concerned about that.”

Auburn’s Office of Institutional Research did a study of the ethnicities of their students. In 2020, there were a total of 30,737 students, and the Black community made up 1,624 of this grand total. The university also accepted 23,805 white students in the same year.

Along with students, Auburn’s hiring process is also under protest. For Dowdell, Auburn Athletics firing of Travis Thomas Sr. revived his passion for change.

Thomas was a director of academic support for Auburn Athletics until he was fired this March.

In 2019, an Auburn professor changed a football player’s grade for his eligibility in the Outback Bowl. Thomas said he was not aware of the grade change until Auburn hit the field.

Thomas was the only one fired when this allegation hit the scene. Allegedly, both of his supervisors were not punished. There is currently a discrimination lawsuit in the works.

“This is systematic racism at its core,” Dowdell said.

Auburn’s Office of Institutional Research also developed statistics of the diversities within the staff. In 2020, there were only 26 Blacks in managerial and administration roles among 333 whites.

President of the Concerned Citizens of Opelika, Oscar Penn, joined Dowdell in this protest.

“What the public needs to do is stop being silent,” Penn said.

Both Dowdell and Penn agreed that Auburn needs to welcome more Black students.

“You can give free scholarships, you can go to all Black colleges and ask them to come and be a part of Auburn University,” Dowdell said. “Why should you ask the NAACP or me, as a civil rights leader, to bring people to Auburn, when that’s your job.”

“In Opelika, we have a voice, and we’ve always had a voice,” he said. “We seem to be openly addressing our issues. In Auburn, the community has been mostly silent because the university shattered the Black community.”

With lives and finances intertwined with the university, Penn explained how hard it is for people to truly speak out. This is exactly why Penn said he took a stand.

“We are proud of the effort to come out and make a difference,” he said. “We don’t want to be seen as troublemakers.”

Penn said he thinks Auburn should allow younger people to the table and really listen to what they have to say.

Listening to Black students is the first step for positive change, Penn said. Their voices deserve to be heard by the university.

“Let’s revamp this thing and bring the people to the table,” Penn said.

Not only does Penn want change, he wants it to stick. He wants a taskforce made, specifically one that studies racial issues within Auburn University every three to six months.

Both Dowdell and Penn urge everyone to get social and start conversations.

“Racism anywhere is a threat to justice everywhere,” Dowdell said.

To join the movement, head over to social media. Protest dates as well as livestreams can be found on Bishop Pastor Joyce Dowdell’s Facebook page.