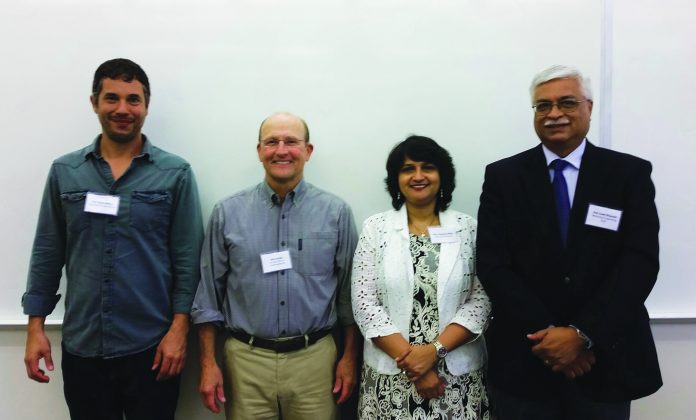 A crowd of nearly 80 people, including candidates for local and state offices, attended a forum Aug. 19 at Auburn University’s CASIC building to learn the latest economics and science regarding climate change due to human-caused global warming and what we can do about it. Mike Kensler, Director, Office of Sustainability at AU moderated the event which included four AU professors.
To understand what is happening in Earth’s atmosphere, Dr. Martin Medina- Elizalde with the Department of Geosciences discussed the latest science regarding climate change. He emphasized the need to come up with solutions that reduce greenhouse emissions from human activity that drive global warming.
Not only can negative impacts be reduced economically but reduction in losses due to extreme weather events would mean huge savings.
Dr. Brenda Ortiz, extension specialist for Auburn’s Department of Crops, Soils and Environmental Sciences, emphasized how weather conditions in Alabama are becoming more extreme making it difficult for farmers to conduct profitable operations. Ortiz discussed a computer program that she helped developed using the latest climate data that farmers download to assist them in making better decisions regarding things such as which crop varieties to use, planting and harvesting dates, and fertilization rates.
How urbanization of our communities impacts climate change and what we can do about it was discussed by Dr. Chandana Mitra, department of geosciences.
Mitra said municipalities can greatly reduce their negative impacts on climate by including more green spaces. These would include forested parks, tree-lined streets, roof-top greenery and urban forests. Mitra pointed out that the rate of climate change is faster than had been predicted.
The economic opportunities in renewable energy projects in Alabama was discussed by Dr. Sushil Bhavnani, Department of Mechanical Engineering. His prime example here was the cooperative venture between Walmart, which is converting all its world-wide operations to alternative sources of energy, and Alabama Power Company which established a solar power farm in Chambers County. The installation covers 1,100 acres and can deliver enough electricity to power 18,000 homes.
In his closing remarks, Kensler referred to groups working to reduce emission of greenhouse gases nation-wide through programs such as cap-and-trade and taxing carbon-based products.
Instead of a tax which would be money used by the government, Citizens Climate Lobby proposes a carbon fee and dividend program whereby fees imposed on coal, oil and natural gas as it comes out of the ground would be redistributed to all households as a dividend.