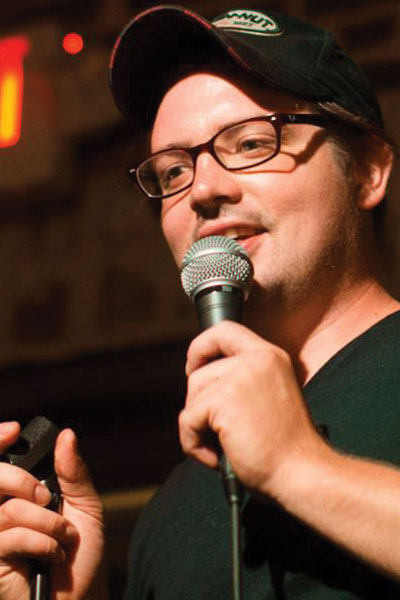 Special to the Opelika Observer
Dusty Slay grew up in Opelika  before entering into comedy. He recently completed a multi-state summer tour that included a stop in his hometown.

Comedian Dusty Slay brought his comedic stylings back to Opelika recently in his first performance as a comedian in his hometown.

Slay is a native of Opelika who has always enjoyed making people laugh. But before he discovered his natural ability to entertain, he was a member of the middle school football team and the 9th grade wrestling team and played a few recreational league sports as a child, only to find out his heart was not in athletics.

Slay graduated from Opelika High School in 2000 and attended Southern Union State Community College for all of two days before he resolved himself to leaving Opelika in 2003 for Charleston, S.C.

He won numerous comedy competitions around Charleston before moving to Nashville in April of this year and recording his first comedy album, which will be released later in the year.

Slay’s Road Trip Comedy Tour wrapped up July 11 back in his hometown of Charleston, S.C., but not before the show in Slay’s hometown. His friends and fellow comedians Evan Berke, Vince Fabra and Derek Humphrey accompanied him in the show at the Event Center July 8.

While he did not view the show in Opelika as “some valiant return home,” Slay said he is more than thrilled and honored to have showcased his hobby and career to his hometown.

“I am very excited to be doing a show for family and friends that I can be proud of,” Slay said.

For Slay, comedy has been an uplifting and rewarding career path. He used to only do comedy on the weekends in Charleston but decided that making people laugh was worth much more than his day job. With the support of his family and friends and the motivation he received in Charleston years ago, he has resolved himself to loving what he does.

“Making people laugh – it’s the absolute best part. I love when people tell me they have been having a rough time and they came to my show and it made them really happy,” Slay said.

Realizing comedy was the perfect fit for him did not occur until he was already thoroughly involved in the business, however. He said that his heart was not in comedy when he first began in 2004, but in the past four years he has dedicated himself to comedy and entertaining.

In those four years, Slay has won the Charleston Comedy Festivals Stand-Up Competition in both 2011 and 2012, and he was voted Charleston’s “Best Local Comic” in 2013 and 2014.

Slay was nothing but excited to put on this show with three men who he said are three of his greatest friends and a few of his very favorite comedians.

“This show was not all about me. The comics that I’m on the road with are some of the nicest guys and best comics I know,” Slay said.

The comics take different bits of their lives and turn them into hilarious antics anyone can enjoy.