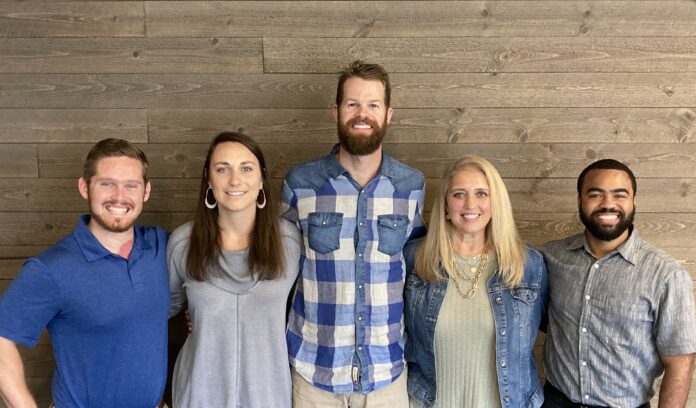 A local family business rooted in the highest quality care, Cornerstone Family Chiropractic was established in 2010 by Dr. Russell Herring and his wife Kathryn Herring, who opened the business with an outreach.

With a passion for the health of the Auburn community, the two hosted the original back-to-school bash, which allowed them to connect both businesses and families in the area. All proceeds from the event went to The Big House Foundation, a local charity that has become the office charity.

There are four full-time doctors in the office: Dr. Rusty Herring, Dr. Joe Townsend, Dr. Stephanee Lewis and Dr. David Ravdin, all of whom specialize in pediatric, maternal and adult care. Herring graduated from Life University in Atlanta a little over 10 years ago. It was shortly after graduation that he opened the doors to Cornerstone Family Chiropractic.

“The most rewarding part of starting Cornerstone is seeing the lives impacted by the care they have received in our office,” Herring said. “When someone’s health improves, their life improves and that is our why. To make a positive change in as many lives as possible.”

Rachel Wicks, the office operations manager, described how Herring came into chiropractic care. She explained that while he was in school he became very sick with symptoms like loss of weight, energy and appetite. He was passed off to a specialist, who explained that he may have cancer.

Herring was seen and tested by a cancer specialist, but all tests came back negative. After all of these doctor visits, Herring was still sick, so he turned to a chiropractor in Atlanta.

The chiropractor reminded the future doctor of how important it is to take care of your nervous system because it controls and coordinates life throughout the entire body.

“He started getting adjusted very regularly and over the course of weeks saw his symptoms begin to disappear,” Wicks said.

Nearly 10 years later, Herring has been in complete health and knows that “it was nothing short of the body’s miraculous ability to heal itself through chiropractic care,” Wicks said.

Chiropractic care ran in Herring’s family. Both his dad and uncle are chiropractors. With a passion for healing and love for others at heart, Herring launched his business, which is now one of the largest chiropractic offices and the largest pediatric office in the state.

All businesses have been forced to make a shift in their operations due to the pandemic. Wicks explains that in a time like this, the office recognizes how important it is that it keeps the doors open. These are unprecedented times, and health is at risk, Wicks said.

“The health and well-being of one’s nervous system is especially important,” she said.

The office is currently seeing more people right now than ever before.

“You can get a lot of things replaced in the body, but spine replacement is not possible, so we need to take care of the one we have,” Wicks said.

The rooms and tables are wiped down from top to bottom. Everything is cleaned thoroughly as the office is held to a high standard of sanitation.

Alongside the wall in the office lobby, a section of papers labeled testimonials can be found. There are over 30 of these health transformation testimonials all listed by symptom. These symptoms include everything from headaches and backaches to anxiety and depression, earaches in children and ADHD.

Though Wicks explains there is not one specific common symptom that the office treats, “we see people improve in just about any area that you could possibly name.”

After receiving a few weeks of treatment, she informed Herring that she was no longer passing out or having seizures, Wicks said. Over the course of several months, the office watched as this woman slowly started to be taken off of her medications.

“Because they were able to take her off of the seizure medication, she for the first time in her life had the possibility of being able to get pregnant, which she did and gave birth to her first baby,” Wicks said.

The woman is no longer on any of the medications.

“Millions of people utilize chiropractic as a natural approach in their pursuit of health,” Herring said. “I feel the role of Cornerstone will continue being an integral piece of the healthcare puzzle for families as we all strive to stay as healthy as possible.”