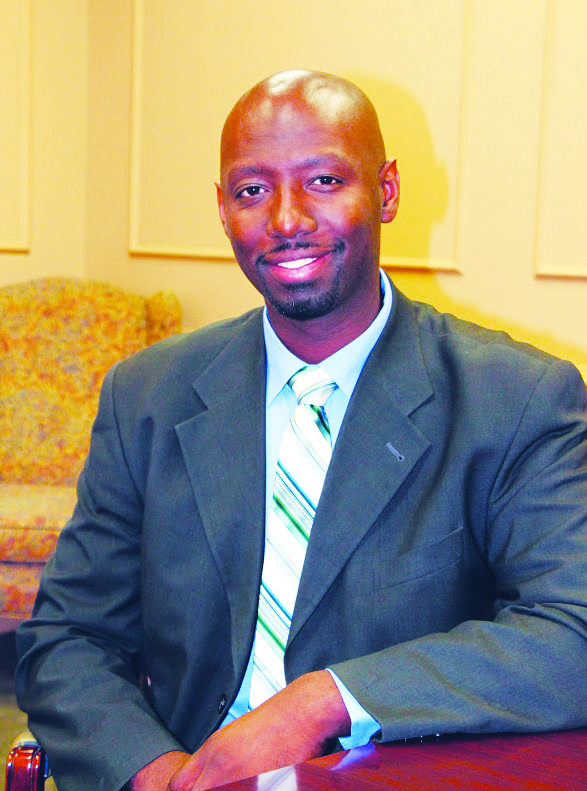 Giving back to Opelika is Harvis’s goal

Antione Harvis, Opelika City Schools board member and Dad’s League director, reflected on how the crucial lessons learned and connections made during his time in the 2009 class of the ‘20-Under-40’ program have helped him in his life and career.
A native of Montgomery, Alabama, Harvis graduated from Booker T. Washington Magnet High School in 1998 and credits his 12th grade English teacher for helping him choose to attend Auburn University.
There, he earned a degree in computer engineering and met his wife, Raven. After finding a church in the area they connected with, Harvis said they “decided to put down some roots.”
At the encouragement of Raven, who had recently been through the 20-Under-40 program, Harvis decided to try it for himself.
“[We] just met so many decision-makers and got an understanding of how our government here works … so I thought that was phenomenal,” Harvis said. “It really kind of gave us an introduction to the city and helped us to understand what turns the wheels behind the scenes.”
Harvis said experiences like these helped to demystify the process of becoming involved in the city.
“Once you kind of peek behind the curtain, then you realize it’s just the wizard back there … it just allowed for me to feel like it was more accessible for me to be able to serve in the community and to be a vital part of what makes our community go,” Harvis said.
The Opelika-based nonprofit Dad’s League started in fall 2015 to teach and empower fathers in the community to improve relationships with their children, and Harvis has been there from the start. As director and coordinator for the organization, he meets with individuals and organizations in the community that have an interest in helping their cause.
According to Harvis, there was one lesson in particular from the program that has stuck with him to this day. This lesson involved reading a book called “The Speed of Trust,” which Harvis said taught him the importance of trust in his life. He explained that applying these lessons has been essential in effectively working in both Dad’s League and the school board.
“In order to effectively work or move an agenda for an initiative, I believe that a relationship is one of the most crucial pieces to getting any of those things done,” Harvis said. “Understanding that, you’ve got to build trust, and you’ve got to be a trustworthy individual—somebody a person can invest trust into and be dependable … it’s crucial, and just the importance now that I place on that and building relationships—it’s something that I use every day.”
Harvis said he feels fortunate to have been part of the 20-Under-40 program and to have learned vital lessons like this one.
“I think it’s served me well,” Harvis said. “I think it’s one of the best initiatives that’s been set forth in our community to kind of introduce you to the community … especially if you have a desire to make change or to be impactful in any way.”