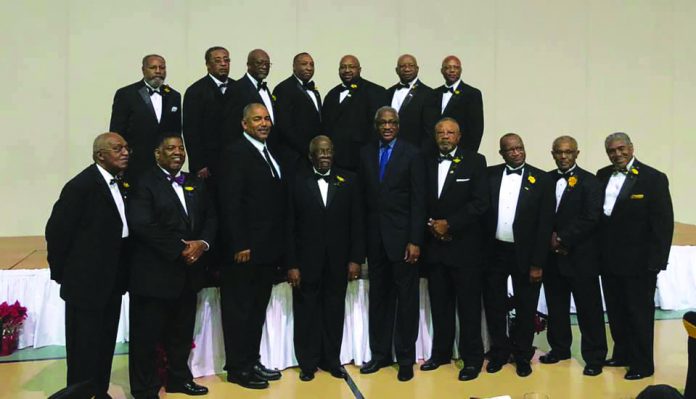 The Auburn-Opelika chapter of 100 Black Men of America Incorporated held their 9th annual Scholarship Gala last weekend.
The Vice Chairman of the national organization, Albert E. Dotson, Jr., was the keynote speaker for the event.
Dotson challenged the crowd to go to a school and ask the principal, ‘how can I help?’
Dotson recalled moving from Atlanta Georgia to Miami Florida and meeting a custodian that ‘spoke life’ into him so it became his duty to speak life into other young people. Dotson encouraged everyone to spend some time in the schools ‘speaking life’ into the students. Dotson said that he plans to return to the Auburn-Opelika chapter’s gala next year to see who answered the challenges.
About The 100
The overall concept of The 100 began in 1963 in New York City when a group of concerned African American men began to meet to explore ways of improving conditions in their community. These visionaries included businessmen and industry leaders such as David Dinkins, Robert Mangum, Dr. William Hayling, Nathaniel Goldston III, Livingston Wingate Andrew Hatcher, and Jackie Robinson. Since the group’s inception, the vision has materialized to be shared by more than 10,000 members reaching over 125,000 underserved, underrepresented minority youth annually. Their motto, “What They See Is What They’ll Be,” expresses how our programmatic services rendered to disadvantaged, disenfranchised and low-income youth and families positively change their life trajectory.
For more information about the national organization and its efforts, visit www.100blackmen.org. The organization’s headquarters are located in downtown Atlanta.
The Local Chapter
The president of the local chapter is Rev. Dr. Clifford E. Jones, pastor of Greater Peace Baptist Church on Jeter Avenue.
Alabama House Representative for District 83 Jeremy Gray attended the event. Gray has been a member of the organization in year’s past.
“I know the presence of positive African-American males are few in the community and anytime you have an organization like the 100 that’s dedicated to mentoring the youth and being a part of the restoration of broken communities, we must embrace them,” Gray said.
“The 100 is embodied with a lot of wisdom and knowledge but the organization needs youthfulness that way the mission can continue. I understand that, that’s why I took on Pastor Jones’s challenge to come back and recruit younger talent. They need gap bridgers, young men ages 23-35 who are influencers of the younger generation.”