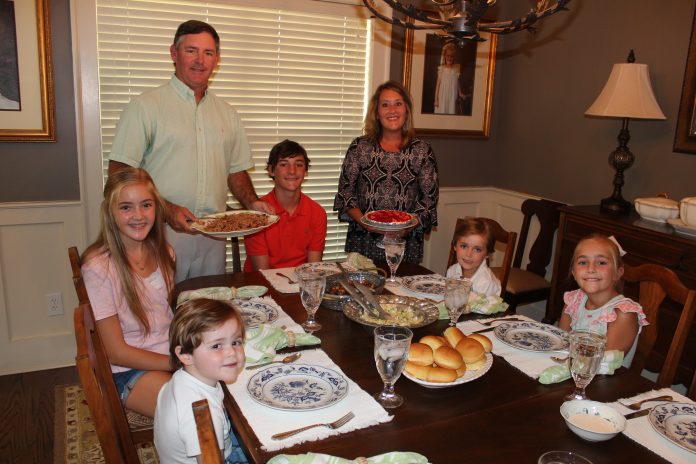 This year, the first game for the Bulldogs will be held Thursday night, Aug. 22 at 7 p.m. against Callaway High School at Bulldog Stadium.

“I should have known our life was going to revolve around football,” says Drew, “since we met when I was working for the head coach at Auburn University.”

While Drew grew up in Opelika, Erik was born at the Eglin Air Force Base in Florida. His family moved to Athens where his father went to work at the Redstone Arsenal. Growing up, Erik played “about anything we could play,” and in high school played baseball and football.

After graduating from Athens High School, Erik attended Auburn University. He says he probably should have realized in high school that he wanted to be a football coach. He looks back on notes he still has from high school where he was drawing football plays on the side in the margins. In math classes at Auburn, he was drawing plays.

“I probably should have realized it earlier,” says Coach Erik. “In 1995, I made the decision to change majors and get into coaching. I was majoring in engineering and had done some work at the Redstone Arsenal when I realized that was not what I wanted to do. I changed majors. It was a shock to my Dad who thought I was going to be an engineer like him. My parents are happy with the decision now.”

After graduating from Auburn, Erik worked for three years in the Auburn football program under Coach Terry Bowden. During this time, he met Drew who was working for Coach Bowden while she was an Auburn student. Erik stayed for the first spring with Coach Tommy Tuberville. He then took a coaching position at UMS Wright Prep School in Mobile.

Erik was in Mobile for a year before he and Drew were married in 2000. They moved to Mobile and purchased a house. They had only been married seven days when Coach Spence McCracken called to offer Erik a job at Opelika High School coaching baseball and football. They put the house on the market and moved to Opelika.

Erik was an assistant coach for 18 years before becoming head coach last year. “We have put in a lot of work since last year,” he says, “and we have a lot of great kids and some really good football players this year. Great football players make great coaches. We get too much credit sometimes. It is all about players.

Drew is also excited about the upcoming year and taking the children to the games.

She grew up in her family’s historic home on Fourth Avenue in Opelika. The house was built around 1890. Her father’s grandparents, Elizabeth and Steve Hollingsworth, purchased the house in 1910. Drew has the dining room table and open hutch her great-grandparents purchased for the house. Much of the furniture in their house came from the antique shop her grandparents owned.

Drew and Erik lived in the grandparents’ home where she grew up until two years ago when they moved into a lovely home off Oak Bowery Road.

Drew’s parents are Sue and the late Walter Parrent. Her father, who was president of a bank and chairman of the school board before retiring, was able to see Erik come to Opelika High School as a coach. “I think that was neat for him to be able to see that,” Drew says. “He was so proud of Erik.”

The Speakmans attend First United Methodist Church where Drew is the Children’s Director. She graduated from Auburn with a public relations degree but knew she wanted to be around children. She returned to Auburn and received a master’s degree in education and a teaching certificate through Troy at Phenix City. She taught in the Opelika School System for a couple of years until she started having children. She went to work at the church to allow more time with her children.

“It is a wonderful job and doing what I love,” Drew says, “but having flexibility to have my children with me and being a part of their lives. It is a great balance. ”

Their five children are Bryce, 14; Sara Kate, 12; Hollins, 9; Griffin, 5; and Shep, 3. The children are in five different schools this year, with Shep being with her at First Methodist. The children are also involved in sports. Bryce is the quarterback for ninth grade football team. Sara Kate and Hollins are involved in dance lessons, while both little boys play soccer.

When Drew was growing up, she remembers her mother would serve nice big meals after church on Sundays. She wanted the family to dine together, which is a tradition that Drew and Erik have passed on to their family. While they dine out on special occasions, for the most part with five children they eat at home.

“We treasure the time at home with them,” she says, ”and make the most of it.”

Erik enjoys cooking and grills enough meats on Saturdays to last a few days. He was influenced by his grandmother, who is an excellent cook and would cook for everyone on Sundays. He purchased an inexpensive grill while in college and tested how to cook assorted meats. “ I love to eat,” he says, “so if you love to eat, you may as well learn how to cook.

If he sees a dish on television that looks good, he will try cooking it. If the children like it, he will continue preparing the dish. When he grills on Saturdays, they have those entrees to keep meal preparation easy for a few days before everything gets busy.

With the Coach’s excellent grilling skills, he was asked to serve as a judge for the Opelika Rotary Club’s Burger Wars.

On long busy days, Drew depends on the Crockpot Chicken and the Beef Tips, which cooks for three hours. She can place it in the oven to cook while she attends activities with the children. The Poppyseed Chicken can be prepared the night before and then baked the next day when they get home.

Friday nights can be a whirlwind for the family, but it is something they enjoy. The entire family goes to the games and are at the stadium by six o’clock. The children see their father for a little while after the game.

“We love every minute of it,” Drew adds. “We can’t wait for football season to start. It will be busy, but I know that and embrace it. The kids think the football games are the best in the world. They have grown up around the football field. They love the players, the stadium, cheerleaders and everything about it.”

Plan to attend and support the Opelika Bulldogs this year with Coach Erik. It is bound to be exciting. Clip the recipes and save them for delicious grilling dishes, and Drew’s tasty dishes to have on hand for Labor Day and during the fall season.

Coach Erik Speakman’s Grilled Sweet Corn
4 ears sweet corn
Butter
Lime Juice
Chili Powder
Wash corn and pat dry.
Tear off 4 pieces of foil (enough to wrap 1 ear in each piece).
Place corn on foil, spread butter over top of corn. Sprinkle chili powder on butter (to taste) and then pour close to 1 tablespoon of lime juice over corn (more for stronger lime flavor). Wrap corn in foil, leaving area in top to allow steam to build while cooking.
Grill until done. Approximately 25-30 minutes off heat on grill at 350 degrees.
Serve on the cob or cut corn off and serve.

Poppyseed Chicken
4 cups cooked and shredded chicken
1 can of cream of mushroom soup
1 can of cream of chicken soup
8 oz. sour cream
2 sticks butter
2 big rolls Ritz crackers
3 Tbsp. poppyseeds
Melt 1 stick of butter in microwave. Mix soups and sour cream with butter. Place cooked and shredded chicken in the bottom of a Pyrex dish. Spread soup/sour cream mixture over chicken.
Melt second stick of butter in bowl, crush and mix in Ritz crackers and poppyseeds and spread on top of Pyrex dish. Bake at 350 for 20-30 minutes or until crackers are golden brown.