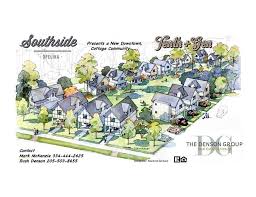 The construction of the “Southside Opelika” subdivision is expected to move into its second phase in early 2020.
According to Richard Patton, one of the project’s co-developers, three of the planned seven houses to be built along South 8th Street and Avenue D are completed and have residents. Recent weather has bogged down progress on the other four houses, but he said that they plan to break ground on the next two in early January, conditions permitting.
Phase two of the Southside project will include the construction of four town homes, which will be located behind the houses off Avenue D. They will be landscaped like the houses and equipped with fencing for privacy.
The third and final phase of the project has changed since the Observer’s last interview with Patton. Instead of condominiums, there will be 16 cottages constructed to mirror the community’s needs.
“With these cottages, we’re taking what we’re doing on South 8th Street and (Avenue) D and doing it on a smaller scale. We felt like individual homes fit the neighborhood better and would be in bigger and better demand,” Patton said.
Each cottage will be approximately 1,200 square feet, and feature either two or three bedrooms and two baths. Construction on these is expected to take place sometime next year. They will be located at the dead end of Avenue D between 9th and 10th Streets.
The history of the Southside neighborhood can be traced to 1854. Many old homes were deemed “as too far beyond repair” by Patton and city officials, which led to his vision of creating a vibrant community within walking distance of downtown Opelika.
“We’ve got a lot of great things going on in downtown Opelika, but I think we need to add a lot more residential walkability. That’s the main focus or selling point of this project: living in downtown,” Patton said. “People ask me who we’re marketing this to, and I tell them, ‘it’s not an age graphic, it’s a demographic of people who want to be able to walk downtown, eat out, shop or get a drink.’ We want to market to downtown people, so it doesn’t matter if you’re 20 or 90; if you’re a person that likes walkability and getting out and your backyard is the downtown, that’s who this product is for.”
For more information or to inquire more information about pricing and availability, Patton said he can be reached by email at richpatton23@gmail.com or contacting Denson Group realtors at 334-759-7525.