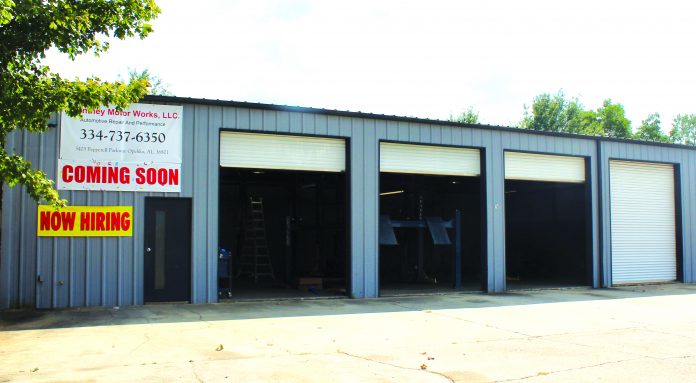 Mannthey Motor Works of Phenix City has expanded into Opelika, opening a new location at 3403 Pepperell Parkway last Tuesday.
Founded and owned by the husband-and-wife duo of Jeffrey and Jerica Mannthey, the new shop is the first expansion the couple has made since officially starting the business in 2017.
Originally from Oregon, Jeffrey stayed in the area after two years the U.S. Army. Mostly doing mobile mechanic work, he and a friend formed a partnership and moved their growing business into Jeffrey’s back yard.
Eventually, they rented out a small space for a year before opening their own shop last year at 1600 Industrial Drive in Phenix City. Building a reputation based on their honesty and quality workmanship, Jeffrey said an expansion only two years removed from starting the business was the next natural step.
“I think people (gravitate) toward us because of our honesty. Our philosophy is to treat our customers right, treat them like it’s your own mother,” Jeffrey said. “We try to keep our price point below our major dealerships, but we do a lot of work for them at a good price too.”
Mannthey Motor Works’ list of services ranges from “regular oil changes to complete engine rebuilds,” according to Jeffrey. More detailed or performance-based work will be handled at their Phenix City shop. In the near future, he added that they plan to work on diesel-fueled vehicles and motorcycles and expand as part of his goal to become a national chain.
Once the business is fully operational, Mannthey said he expects to have five employees working within the shop, which has 10 bays. Hours of operation will be 9 a.m. to 5 p.m. Monday through Friday and 9 a.m. to 2 p.m. on Saturday.
“Our end goal is to be known for our quality and to get a job back as close to its original state as possible. We try to be as fast as we can … but I don’t like telling people a time and being late, but that’s just part of the game unfortunately,” Jeffrey said. “A transmission or an engine can’t be replaced in a day. However, we (have) and will (always) take pride in our costs, quality of work and efficiency.”
For more information, like and follow the shop’s social media pages or visit www.manntheymotorworks.com.