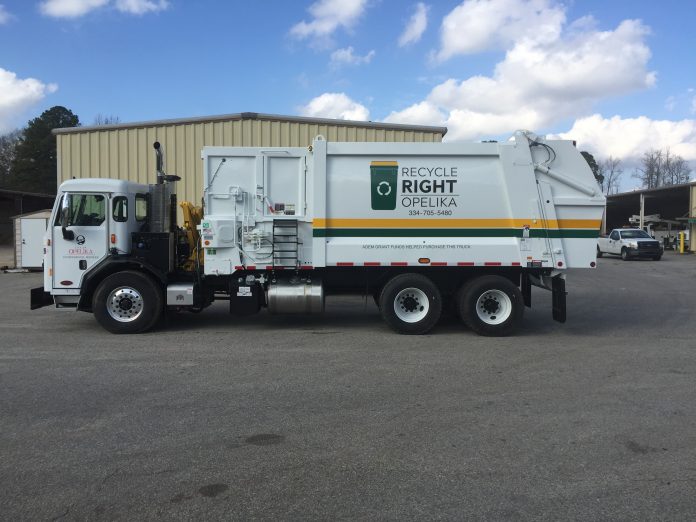 The Opelika Environmental Services Department recently launched the “Recycle Right Opelika” campaign. This campaign is designed to educate citizens about the proper way to recycle and fight the recycling contamination problems in Opelika.

CONTAMINATION IN RECYCLING A BIG ISSUE
In the last year, there have been major changes in the recycling industry. China has put up what is called the Green Wall. The U.S. was shipping approximately 30 percent of its recycled materials to China with this material having a contamination rate of 20 percent. That means that for every 1,000 pounds of recycling, China had to remove 200 pounds of unacceptable material. This became so expensive that China issued regulations allowing only one half of one percent of contamination or only five pounds per every 1,000 pounds.

This level of contamination is virtually impossible to achieve so this regulation has stopped most U.S. exports to China. With major recyclers scrambling for places to accept their recycling, prices dropped and in some cases materials had to be taken to landfills because there were no markets for it. Contamination is a nationwide problem and if we want to continue our recycling program this contamination must stop.

“This has caused all recycling facilities in the U.S. to become much stricter on what they will accept, which has an impact on what we can accept. We have begun checking containers prior to being dumped. What we have found is most curbside customers are doing a pretty good job, but our recycling centers are receiving a great deal of contamination,” said Opelika Environmental Services director Terry White.

In February, White said that more than 60 percent of the city’s 300-gallon carts were contaminated and had to be emptied by a garbage truck and taken to the landfill. This contamination must stop, or it could have a negative impact on the city’s ability to take materials to the Columbus Recycling Center.

Finding a solution for these four problems will help the city deal with this issue:

Styrofoam: The Columbus Recycling Center does not accept styrofoam.

Trash: Please do not use recycling containers for household trash.

If the city can correct disposal of these items, it would greatly decrease contamination. Ways the city will tackle issue include the consolidation of some recycle sites, limited hours and constant manning by an employee to monitor dropoffs.