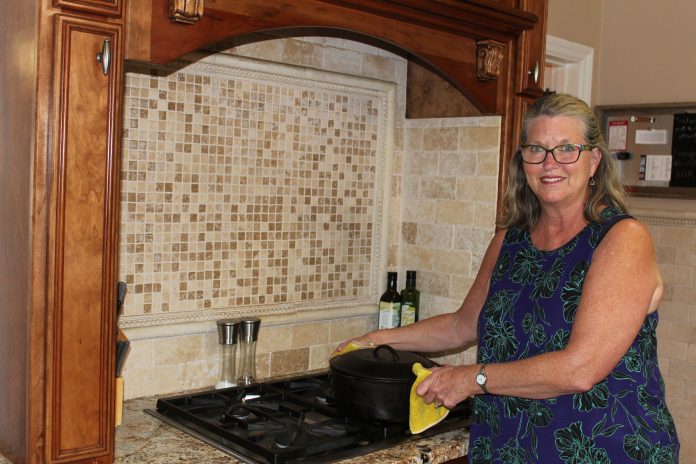 Lyndal Curry and her husband, Tim, have lived in a number of places across the country. Lyndal has a love of cooking and has gathered recipes from friends at each place they have lived. She now has a large collection and preparing the recipes brings back wonderful memories of friends in every location.
Growing up in Atlanta, GA., Lyndal was influenced in cooking by her grandmother, who was from Texas. She spent summers with her grandmother in Charlotte, N.C. She taught Lyndal how to cook, and they would cook together, creating delicious cakes and other baked goods.
Lyndal’s father, Bill Myrick, was the lifestyle editor for the Atlanta Journal and Constitution newspaper. Later, they moved to Birmingham where her father worked for the Birmingham News. Her father grew up on a large farm in Slap Out, Elmore County.
Tim is from Birmingham, but they did not meet until they were students at Auburn University.
After Lyndal and Tim graduated and got married, they moved to Birmingham for Tim to accept a position at US Steel. The company transferred him to various places, including Memphis, Tenn., Oregon, two places in San Francisco and then came back south.
When they moved to San Francisco, she worked part-time for the City of Concord in the parks and recreation center. Later, they moved to Walnut Creek, which was closer to the city.
“After we decided to leave San Francisco,” says Lyndal, “we stepped out in faith and moved to the Pensacola area to work.”
She taught full time at the University of South Alabama, while Tim was working with the Mobile Fire department. They are both paramedics. From Pensacola, they moved to Spanish Fort.
In 2011, the Currys moved to Lee County. Lyndal worked full time at Southern Union as an EMS instructor for five years When she retired, Lyndal began teaching classes online for Southern Union. While Tim retired from the fire department, he works part-time teaching EMS . They also work part-time at the medical school on the Auburn campus.
The Currys have two daughters. Daughter Brennan and her husband, Justin Townsend, live in Greenville, S.C. and have three children, Eliza, 10; Rhys, 8; and Ann Marin, 6 years old. Their other daughter, Erin, and her husband, Jeff Radford, live in Birmingham. They have two children, Saxby, 13, and Alcee, 11.
Lyndal and Tim still enjoy traveling. They recently visited Calgary and Lake Louise in Canada. “Every day we were treated local snacks such as maple cream cookies,” says Lyndal. “One day our guide said we were having Nanaimo Bars. They are named after the city of Nanaimo on Vancouver Island, and they are well known in Canada. They were good, but not as good as the recipe my friend in Walnut Creek gave me. Her husband was Canadian, and the recipe was his mother’s.”
Another favorite cookie is the Almond Joy Cookies embellished with milk chocolate chips, coconut and almonds for a yummy treat. Lyndal will bake a few and then scoop the dough into a quart sized Ziploc bag. She mashes the batter out to flatten and freezes them. When ready to bake, she breaks off part, lets it thaw and then bakes the cookies.
A unique recipe is the Grits Dressing. She was given this recipe in Charleston from a family that had handed down the recipe for about 125 years.
Lyndal enjoys entertaining. She will prepare most of the meal in the morning. She suggests getting everything done ahead when entertaining, so as guests arrive you are relaxing with a glass of wine and not rushing round.
The Conecuh Sausage and Asparagus Pasta is a favorite to serve when entertaining, and it is a recipe she created. Tim will grill the sausage and freeze some to have on hand for adding to the pasta.
Another go-to dish for company is the Mexican Meatloaf. She will prepare three at a time and freeze them. Sometimes after church, they will invite friends over. She will pull out one of the meatloaves that takes about an hour to cook. She will whip up potatoes and assemble a salad to complete the menu. The meatloaf glaze is spicy sweet prepared with fresh or canned tomatoes, mustard, onions, chilis and brown sugar. She will also freeze the glaze topping.
The Hot Fudge Pie is her standby dessert to mix quickly for company. She serves it topped with ice cream.
Lyndal is organized in the kitchen. “I like to cook smarter, not harder,” she says. When she gets a bag of lemons, she will go ahead and juice and zest all of them. She puts the zest in pill bags and the juice in ice trays to freeze for later use.
She discovered a way to boil eggs that are easy to peel. She puts them in a steamer basket over water and boils for 12 minutes. Then she puts them in ice water. They are easy to peel every time.
Lyndal got the idea for the Black-Eyed Pea Soup from the Wish Bone Café in Montgomery. She came home and copied the idea.
Along with eating good food, the Currys enjoy scuba diving. Tim was a scuba diving instructor in Oregon and San Francisco. They now go to the Caribbean to scuba dive.
Lyndal also enjoys being in the Community Bible Study at First Baptist Church.
Following are a variety of wonderful recipes collected over time. “I like to share my recipes that I have collected from friends along the way,” says Lyndal. “I generally have a story with each recipe that brings back memories of friends and good times.”

Almond Joy Cookies
1 cup butter, room temperature
1 1/2 cups white sugar
1 1/2 cups brown sugar
4 eggs
3 tsp. vanilla
4 1/2 cups flour
2 tsp. baking soda
1 tsp. salt
5 cups milk chocolate chips
2 cups sweetened coconut
2 cups chopped almonds
Pre-heat oven to 375. Lightly grease cookie sheets – parchment paper works best.
Combine dry ingredients; set aside.
In a large bowl, cream butter and sugars together. Beat in eggs, one at a time, stir in vanilla. Stir in dry ingredients until well mixed. Then stir in the chocolate chips, coconut and almonds. Drop by rounded tablespoons full onto the prepared cookie sheets.
Bake for 8 to 10 minutes. Cool on baking sheet for 5 minutes before removing to a wire rack to cool completely.
This recipe makes 10 dozen cookies so be prepared. I mix all the ingredients together with the mixer then mix in the nuts, coconut, and chocolate chips by hand.
The dough freezes well. Fill a quart bag and squash the batter flat and freeze.

Black-Eyed Pea Soup
2 cups dried peas
1 onion, chopped
1 bell pepper, chopped
1 celery stalk, chopped
2 Tbsp. bacon grease
2 Tbsp. butter
½ cup whipping cream
1 can Rotel (or other spicy canned, chopped tomatoes)
6 cups savory chicken broth (use chicken soup base, Tone’s)
Soak peas per pkg. directions then cook peas.
When done, sauté vegetables in butter and bacon drippings until onions are clear. Stir in Rotel to taste; add chicken broth and peas. Heat. Remove from heat and add whipping cream.
Season to taste with Luzianne or Tony’s seasonings as needed.
I have added ham/bacon/prosciutto for flavoring
Also, if you want it thicker, I blended a cup or two with the immersion blender and returned it to the soup.

Eddie Mae Byrd’s Grits Dressing
This simple recipe came from Charleston, S.C. and served at Thanksgiving and Christmas for five generations, converting waves of in-laws with their first taste.
Bacon grease, room temperature
2 cups cold prepared grits
16 slices white bread including heels, crumbled (spread out pieces and leave overnight, they will be hard, just right to crumble)
3 ½ cups turkey or chicken stock
2 eggs, beaten
2 medium onions, chopped
Generous salt and pepper, to taste
Preheat oven to 350. Liberally prepare a 9 X 13-inch clear glass baking dish with bacon grease.
In a large bowl, combine grits, crumbled (not crumbs) bread and stock until “slack” (meaning a little lose but thick), using hands to thoroughly incorporate.
Add eggs, onion, salt and pepper; mix thoroughly. Let sit for 15 minutes. Add to baking dish; brush top with bacon grease.
Bake for 45 minutes or until browned (center may not be totally firm). Allow to reach room temperature to “set up” before cutting into squares for serving. We generally serve at room temperature with hot giblet gravy, but it is easy to warm in the microwave or in the oven while the turkey is resting. Makes 8-10 servings.
Sometimes I will throw in a half bag of prepared cornbread dressing (Pepperidge farms).

Homemade Onion Rings
Cook time: 15 minutes
1 whole large onion
2 cups buttermilk
2 cups all-purpose flour
1 Tbsp. (scant) salt
1/4 tsp. (to 1/2 tsp.) cayenne pepper
1 quart (to 2 quarts) canola oil
Black pepper to taste
Slice onion very thin. Place in a Zip-Lock bag and cover with buttermilk and soak at least 1 hour.
Combine dry ingredients and set aside.
Heat oil to 375 degrees.
Grab a handful of onions, throw into the flour mixture, tap to shake off excess, and plunge into hot oil. Fry for a few minutes and remove as soon as golden brown. Don’t cook too many at a time.
Repeat until onions are gone.
Eat before your family sees them.
Repeat with another onion, because they’ll be really mad they didn’t get any. Makes 2 servings.

Cathead Biscuits
Preheat oven to 450.
1 stick salted butter, melted in iron skillet (don’t allow to burn)
2 ½ cups all-purpose flour
1 ½ Tbsp. sugar
1 ½ Tbsp. baking powder
2 scant cups of buttermilk
1 ½ tsp. salt
Mix together and spread into the hot skillet and slice into single servings before baking or drop in serving sizes into skillet. Bake for 20 minutes or until browned.
These are thick, heavy biscuits that make great breakfast sandwiches. Fill with fried egg, bacon and cheese. Wrap in foil and head out the door

Bran Muffins
2 cups boiling water
2 cups Kellogg’s All Bran
1 heaping cup shortening
3 cups sugar
4 eggs
1 quart buttermilk
5 cup all-purpose flour
5 tsp. soda
1 Tbsp. salt
4 cups Kellogg’s All Bran
Raisins/nuts, optional
Pour boiling water over 2 cups All Bran; set aside.
Cream shortening and sugar in very large bowl. Add eggs and beat in well. Add buttermilk and scalded Bran. Sift flour, soda and salt together and add, with the 4 cups All Bran, to the liquid mixture. Beat until just blended. Add raisin or nuts if desired.
Bake in greased muffin tins for 15 – 20 minutes at 400.
This is an old farm recipe that makes a very large quantity – 7 or 8 dozen. The batter will keep in a tightly closed container for a month or more in the refrigerator. I always give some batter to friends. It’s easy to scoop out just enough batter for a couple of muffins at a time.
** I often substitute 2 of the 4 cups of All Bran with 2 cups of oatmeal.

‘The Good-Hard Life’: Jay and Katherine Wolf Speak at Lakeview Baptist in Auburn