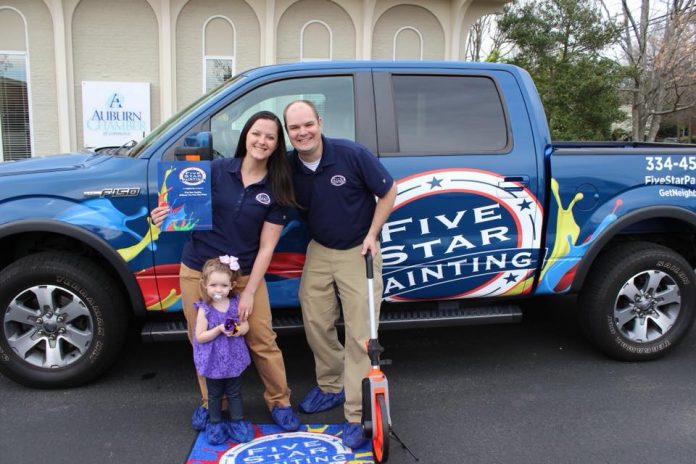 Jessica Snider co-owns and manages Five Star Painting of Auburn with her husband Daniel, in addition to serving in the U.S. Army Reserve. For Jessica, her time in the Army has provided an opportunity to serve her country in a meaningful way, while Five Star Painting enables her to care for customers and develop excellent working relationships with employees.
Experiences in the Army Reserve
Jessica’s journey began in high school, when she was unsure about her direction and when her
ROTC Commander encouraged her to take the ASVAB exam so that she could join the military. When she wasn’t successful the first time, he pushed her to retake it.
Upon successful completion of the ASVAB, she had the opportunity to join the military.
“I went into the reserves, and that was the best decision of my life,” Jessica said. “I’ve got 14 years in this year, and I feel like I’ve come really far with it.”
While working in her first job as a fueler, Jessica’s unit was deployed to Afghanistan, and she transferred from Georgia Military College to Georgia Southern University to ensure that she could go to her deployment.
“I really wanted that experience and wanted to feel like I did something,” Jessica said. She served in Afghanistan from 2009 until 2010, while her husband served in Iraq from 2008 until 2009.
After returning from deployment, Jessica moved from being a fueler to working in human resources, where she felt that she could make an impact in the lives of other soldiers. “I feel very fulfilled in the military, I guess that’s why I haven’t gotten out yet,” she said. “With as many soldiers I can help, I feel good about it.”
In her current role, Jessica works with soldiers to ensure that information in their personnel filesis up-to-date and correct to ensure that discharges and payroll paperwork are processed without delays.
She also serves in the role of an informal counselor, which enables her to touch lives daily.
She also met her husband when both were stationed in Florida.
“That’s our little love story,” Jessica said. “I was a fueler, and he was a trucker. He came through my fuel point and said he loved the smell of my perfume, which was called “diselle,” also known as “diesel.” From there, the couple went on to get married and eventually moved to Auburn, where they are now raising a four-year-old daughter and running a successful business.
Professional Experience Leads to Starting Five Star Painting of Auburn
Before founding Five Star Painting of Auburn with her husband, Jessica worked for auto dealerships in assistant manager roles. After working as a receptionist and being moved to the parts department, Jessica stated, “I was an assistant parts manager to both parts managers. Next, I was moved out to the service [department].”
When the couple moved to Auburn, she worked at Opelika Chrysler until they started the painting business.
The business started after Daniel, who had become an expert in the painting industry through years working as a manager at Sherwin Williams, decided to start his own business. Daniel believed that by owning his own painting business, he could provide a higher level of quality than was previously available in the area.
Daniel’s philosophy features prominently on the company website, which states, “Five Star Painting of Auburn is proud to give homeowners and business owners nothing but the highest standard of painting services available.”
Daniel went into business while his wife still worked for Opelika Chrysler. However, after realizing the amount of work that was required to run his
own business, he knew that Jessica would be the perfect business partner, bringing her commitment to caring for others as well as management expertise.
How Military Training Translated into Business Success
Jessica said that while she gained leadership expertise by working as assistant manager to several effective managers, the military has given her opportunities to observe inspiring leaders and thus develop her leadership style. Being responsible for others in military leadership roles prepared both Jessica and Daniel for being part of a business in which they supervise employees.
“I have a bad habit of taking care of other people before I take care of myself, which we roll into the business as well, but I don’t think it’s a bad thing,” Jessica said. “I think it’s a good thing. Our partners become like our friends and family, and our customers too.”
For more information, call 205-512-3710 or visit https://www.fivestarpainting.com/.