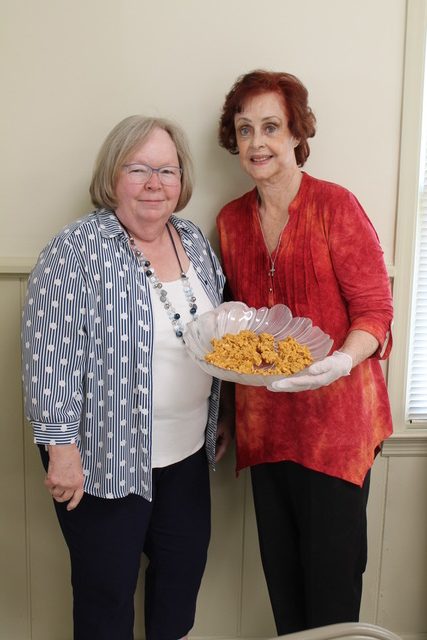 The Mt. Olive Church was the setting for this year’s  Heritage Cooking Contest sponsored by the  Lee County Farmers Federation Women’s Leadership Committee.  The annual contest  spotlights Alabama commodities and agricultural products. Each year the Women’s division selects a different category for the contest. Homemade candy was the featured theme this year.

Carole’s winning Butterscotch Drops are prepared by melting butterscotch chips and mixing with pecans and shoestring potato sticks, a surprise ingredient. They are then dropped on wax paper to cool.

Carole has enjoyed cooking for her family over the years. Her husband Bill was a veterinarian, and they always had horses at their War Eagle Farm. When their daughters, Cheryl and Cynthia, were growing up, they rode show horses and received many awards.

After the girls were grown, Carole and Bill began racing thoroughbred horses.  Their horses raced in Texas, Chicago, Baltimore, New York, Florida and at Churchill Downs in Louisville, but not in the Kentucky Derby.

The Clements hired trainers to work with the horses until they were two years old.  The trainers then hired a jockey and started racing. They raced horses until 2005. Now, there are just a few horses at the farm.

Carole worked at Auburn University in the animal science department for 36 years. She has been active in the Lee County Women’s Leadership Committee and at Farmville Baptist Church. She also volunteers at East Alabama Medical Center and the Community Church soup kitchen.

Mary Richburg’s entry was a favorite dessert she created for her daughter-in-law, Darcey, who has celiac disease.

“After our son and Darcey started dating,” says Mary, “I converted my kitchen to a shared gluten free cooking space with dedicated gluten free prep area, dishes and cookware.  I began experimenting with recipes from a variety of sources to adapt dishes to gluten free.

“My goal was to prepare gluten free meals we all would enjoy,” she adds.  “After tweaking a candy recipe seven years ago, I made Darcey’s Delights for a family event.  Every piece was eaten and enjoyed!  When I began selecting foods to prepare their gluten free rehearsal dinner, I knew Darcey’s Delight would be one of the dessert choices.”

The yummy candy is created by combining chopped white almond bark with peanut butter, and then adding Chex corn or rice cereal or a gluten free crispy rice cereal, peanuts and miniature marshmallows. The confection will keep two weeks at room temperature in an airtight container, a month in the refrigerator or frozen for six months. (If you can hide them from your family!)

Mary is chairman of the Women’s Leadership Committee and has been a member for more than 15 years. She and her husband, Mahlon, have a hay production and registered Angus and SimAngus cattle operation.  Mary enjoys canning and freezing vegetables in the summer months.

Mary and Mahlon both taught in Auburn City Schools for 40 years.  Mahlon taught agriscience at Auburn Junior High and Auburn High School, while Mary was an elementary school teacher and guidance counselor.  They have two children, George and Katie.

The Women’s Division was organized to promote agricultural products and commodities, as well as to provide an opportunity for women to participate actively in policy making.

The Women’s Leadership Group donates to various charities. They have collected towels for Big House, donate to the Battered Women Shelter and the Veterans’ Association. They generally keep a project going all the time.

Ann Whatley is secretary for the Lee County group and is on the board as a member at large for the  Alabama Farmers Federation State Women’s Leadership Committee.

Following are Carole’s and Mary’s winning recipes along with others from Heritage Contests over the years.

Melt chips in microwave for about 30 seconds, being careful not to burn chips. If more time is need, microwave for 15 seconds at a time. Stir in pecans and potato sticks.

Drop by teaspoons on wax paper.  Cool and enjoy!

Note: Shoestring potato sticks can be found in a bag on grocery aisle where potato chips are sold.

Prepare two baking sheets by lining them with parchment or wax paper; set aside.

In a large microwave-safe bowl, combine almond bark and  peanut butter. Heat on high power for 1 minute to melt. Stop and stir. As necessary, heat in 15-second intervals until mixture can be stirred smooth. Be careful not to overheat the mixture because white chocolate is notorious for scorching and seizing up.

To the melted white chocolate-peanut butter mixture, add cereal,  peanuts, and marshmallows.  Stir to coat. Mixture will be runny. If your mixture is extremely runny and would benefit from extra bulk, add a tablespoon or two of extra peanuts or marshmallows.

Using a two tablespoon scoop  or a spoon, drop mounds onto prepared baking sheets (I made 36). Allow candy to firm up for about 2 hours at room temperature, or quick set by placing trays in the refrigerator or freezer for 30 minutes to one hour.

Candy will keep airtight at room temperature for at least 2 weeks, in the refrigerator for a month, or in the freezer for at least 6 months.

Pour into cupcake baking cups. Bake at 325 degrees for 15-20 minutes until toothpick inserted in center comes out clean. Cool, then frost. Makes 24 cupcakes.

Brenda Reese received third place for this bread in 2016.

In a medium bowl, toss blueberries in 2 Tbsp. flour and set aside.

In the bowl of an electric mixer, beat together butter, granulated sugar, 3 Tbsp. lemon juice and eggs.

Sift together 1 1/2 cups flour, baking powder and salt. Add flour and milk alternately to the butter mixture, beginning and ending with flour.

Pour batter into prepared pan, and bake for 1 hour and 10 minutes. A toothpick inserted into the center of the loaf should come out clean.

Cool 10 minutes in pan, then turn out onto a wire rack.

Add buttermilk, bananas and vanilla. Toss in nuts and blueberries.

Bake in greased tube pan at 325 degrees for approximately 1 hour and 25 minutes. Check for doneness.

Pie crusts: Use recipe of your choice or may use refrigerated prepared crust that you can buy.

Put dried apples in a pan filled with water. Bring to a low boil and turn down to a simmer.

Simmer for approximately 8 hours or until apples are cooked to a consistency where you can pull a spoon through the apples and a division in the apples will remain.

At this time, add ½ cup sugar to apples and cook until sugar is absorbed by apples. Put apples in refrigerator to chill. Apples may be kept for several days before using or may be used as soon as they are chilled.

Roll out pie dough and cut out using a cutter size of your choice. I use a cutter 3-inch in diameter and put about a teaspoon of cooked apples on cut out dough.

Also, after cutting out pie dough, I roll the cut out shape so that the pastry is very thin.

Put apple mixture on lower half of dough. Moisten edges of lower dough with water. Fold over top half of dough and use a fork to press edges of dough together.

In a skillet, heat oil ½-inch deep. Cook pies until crust is a golden brown.

May serve as a finger food or place on a dessert plate and serve with Crème Anglaise.

Drain on brown bag or paper towels. Remember our grandmothers used Crisco to fry and brown bag to drain.

Mix flour and salt. Cut in shortening until pieces are the size of small peas.

Sprinkle 1 Tbsp. at a time into flour mixture until all is moistened. Form into a disc and put in refrigerator to chill.

Take out of refrigerator for about 10 minutes before rolling out.

In a small heavy saucepan, heat cream and vanilla until bubbles form at edges.

Continue to cook, stirring constantly, until the mixture coats the back of a spoon.

Preheat oven to 350 degrees.  Bake French loaf as directed on can, cool before slicing.  Spray pie plate with cooking spray.

Transfer mixture to pie plate.  Bake 20 to 25 minutes or until dip is heated through.  Top with remaining bacon and green onions.  Serve hot dip with sliced French bread.

Cream butter and sugar by beating until smooth and fluffy. Add eggs, one at a time, beating after each addition. Beat 2 minutes more.

Bake in a 10-inch greased and floured tube pan at 300 degrees for 1 hour and 30 minutes. Test for doneness before time is up. Let cool in pan for 5 minutes.

Brown 1/2 cup sugar in a cast iron skillet. Combine remaining ingredients except vanilla. Bring to a boil. Add a little boiling mixture to the browned sugar and stir. Then add browned sugar to boiling mixture. Boil about 18 minutes or less. Test until a small amount forms a soft ball when dropped in cold water.