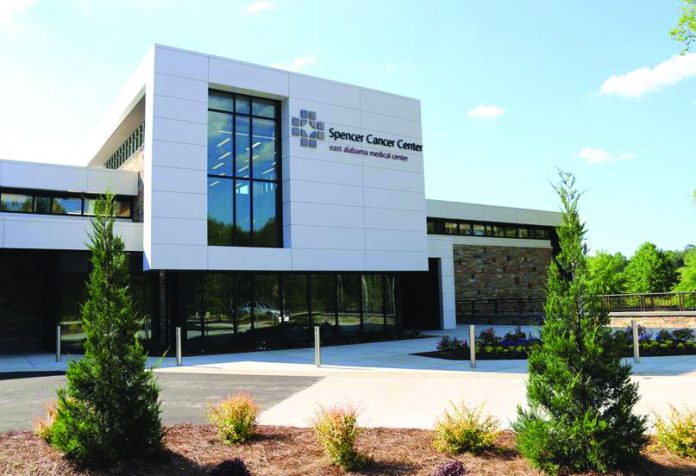 On June 17, East Alabama Medical Center opened the new E.L. Spencer, Jr. and Ruth Priester Spencer Cancer Center, a state-of-the-art facility created to adapt to the growing needs of East Alabama communities and to provide an optimal care environment. Benefits for patients include the ability to stay close to home during treatment, the convenience of having all cancer care services in one place, and providing natural surroundings to promote healing.
Benefits of High-Quality Local Care
In a statement that EAMC included in a recent press release, EAMC President and CEO Laura Grill pointed out that most patients want to receive treatment locally. “When you’re under cancer care, you want to stay at home, and you want to stay in your community,” Grill said. When local cancer treatment is possible, patients can have their family and friends nearby for support. Such social support provides benefits of stress reduction and emotional support that boost healing, as is shown in research, including a 2017 article by Joanne Haviland and other authors published in the journal “Psycho-Oncology” entitled “Social support following diagnosis and treatment for colorectal cancer and associations with health-related quality of life.”
Fortunately, uprooting oneself from a support network to travel far away is usually not necessary to receive the best care in East Alabama.
“For the majority of cancer types and majority of cancer cases – other than the rare, specialty – anything can be treated here,” Grill said.
During a media tour on June 4, EAMC Radiation Oncologist Dr. John Cabelka explained that during the years, cancer treatment protocols have become more standardized, enabling community and regional cancer programs to provide care on par with that of major academic institutions.
Reputable accrediting organizations have responded to the trend of increased local services by seeking to accredit such local and regional facilities that demonstrate excellent cancer treatment. The American College of Surgeons explains on its website that the ACoS Commission on Cancer “recognizes cancer care programs for their commitment to providing comprehensive, high-quality, and multidisciplinary patient-centered care.” The Commission on Cancer’s program has long since recognized EAMC as a comprehensive community cancer program, a distinction that indicates excellent treatment and support.
Growing Space Constraints Prompted Plans for New Facility
Despite the passionate and dedicated staff at the cancer center, space became a limitation to the patient experience.
“We had a great team of skilled personnel, but the facilities were older and too small,” Cabelka said.
While spacious when EAMC first built it, the growing demand for care in burgeoning East Alabama communities caused the center to become too small to enable all patients to bring family and friends to treatment. “Our cancer cases have increased over the past five to seven years as the area has grown, and we simply outgrew our old cancer center,” Cabelka said.
Population growth has caused the number of patients to increase in all specialties, but improvements in cancer treatment are another factor adding to the growth in oncology. The introduction of new and effective treatments over the past ten years has also increased the types of cancers that are considered treatable, resulting in better prognoses for cancer patients and expanding needs for long-term care.
Notably, EAMC provides cancer care to patients in both Lee County and in adjacent areas, as was pointed out by Vice President of Clinical Services Chris Clark. “We don’t just treat Auburn and Opelika patients—we treat all the surrounding counties,” Clark said.
A Larger Facility Designed With Social Support in Mind
The new Cancer Center facility provides much more space for visitors, thus better meeting the social support needs of patients. Having a trusted friend or family member at cancer care appointments can help patients to understand, remember, and adhere to their treatment plans, as was pointed out by EAMC medical oncologist Brandon Johnson during a media tour on June 4. Such support is crucial during the overwhelming time immediately following a cancer diagnosis, when patients are presented with treatment and care instructions while also dealing with the emotional consequences of finding out that they have a serious medical condition.
Comprehensive Care in a Calming Space
The new center also provides additional benefits for stress reduction, including providing all cancer services in one place and offering a calming atmosphere. As EAMC stated in a press release, “Amenities at the new center include 28 infusion chairs in five bays, 10 infusion center extension chairs, a spacious boutique with a wide selection of bras, wigs and other prosthetic items, an outpatient pharmacy, two linear accelerators, 18 examination rooms, a PET/CT machine, physician offices, a chapel, four conference and education rooms, a resource library and more.”
An additional benefit of the new cancer center is the calming atmosphere that it provides, including beautifully landscaped grounds and contemporary building design, featuring natural lighting and large windows overlooking the forest behind the center. Surroundings with natural features have long been known to boost healing in cases of chronic illness, as was described in an article by Bonnie R. Sakallaris entitled “Optimal Healing Environments” and published in the journal “Global Advances in Health and Medicine.” (www.ncbi.nlm.nih.gov/pmc/articles/PMC4424933/)
Proactive Design and Planning
EAMC administrators and physicians also designed the new facility with growth in mind, featuring conference rooms and other multipurpose spaces that can be converted into new treatment areas or utilized for a variety of other purposes as needs change in ways that EAMC’s administrative and medical staff cannot foresee in the present. The space in the main EAMC building freed up by the cancer center’s relocation also provides new opportunities for other growing departments to expand and adapt to changes in local communities and fields.
More information on the Spencer Cancer Center can be found in EAMC’s press release on the center’s opening at (www.eamc.org/eamcs-new-spencer-cancer-center-opens/), on its web page (www.cancercenter.eamc.org/) or by calling 334-528-1070.