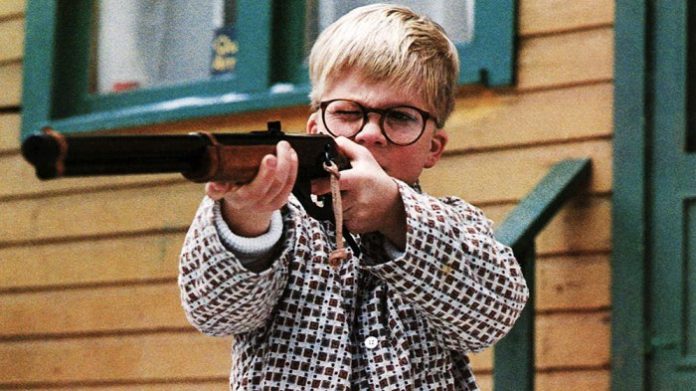 The number one item on the Christmas list of every red-blooded American boyin 1940 and many years thereafter, was the Daisy Red Ryder carbine, the most cherished carbine of all.

Kids who were lucky enough to find one of those most sought after   guns on the planet under the Christmas tree,  could  hardly wait to load  the  magazine of this  cherished  weapon  and  hit the woods, looking for targets to test their skills. Nothing escaped the wrath of the Red Ryder, tin cans, bottles, and rudely constructed paper or cardboard were targets. The  things  you could bring down were limited only by your  imagination.

The Red Ryder had two gold bands on the barrel, a lever action mechanism, and the magazine held 500 rounds of ammunition. No need to worry about running out of ammo, for only five cents you could buy a jumbo sized tube of genuine Daisy Bulls Eye BB shots. For the record, kids in these parts never referred to the Red Ryder carbine as a BB gun, to us, it was an air rifle. The price tag on the Red Ryder was a whopping  $2.95, a heap of money when you consider  the country was still in the throes of the Great Depression.

In the 1983 movie  classic ,“A Christmas Story” the central character in the film, Ralphie, was a young boy whose heart’s desire was a Red Ryder gun for Christmas.

Each  time  Ralphie  mentioned a  BB gun to his mother she would say, “You will shoot yourself   in the eye”. Thankfully, that never happened to Ralphie after he received one for Christmas.

The Daisy BB gun has a storied history dating back to 1882. The Plymouth Windmill Company of Portland Michigan, suffering a loss in business due to the declining sales of windmills, went into the business of manufacturing BB guns which were  invented by Clarence Hamilton. The company began giving BB guns to  customers  who purchased windmills. In 1895 the company named was changed to Daisy Manufacturing Company, Inc.

In 1958 Daisy moved its operations to Rogers, Arkansas, where it is still thriving. Over the years Daisy has sold more than 9 million Red Ryder air guns, making it the best known BB gun in the world. I contacted the Daisy Products Company recently to obtain some additional information on the Red Ryder carbine and spoke  to  Lawrence Taylor who furnished me a copy of the 1940 ad for the Red Ryder carbine. His assistance is greatly appreciated.

So fear not buckaroos, Red Ryder has not ridden into the sunset. With his trusty shooting iron in the saddle holster and Little Beaver, his sidekick riding beside him, is still chasing down cattle rustler, bank   robbers, tin horn gamblers and any other real bad hombres who run afoul of the law.

If there is a Firearms Hall of Fame, the Red Ryder carbine should take it’s place alongside the likes of Colt, Smith&Wesson, Winchester, Remington and Browning, to name a few.